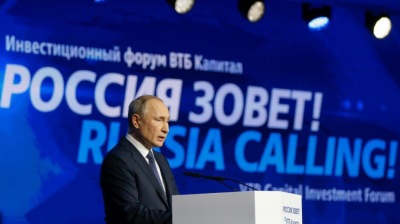 If humanity completely abandons hydrocarbons in the energy sector it will “end up in caves,” Russian President Vladimir Putin said at a conference / wiki
By bne IntelliNews November 21, 2019

If humanity completely abandons hydrocarbons in the energy sector it will “end up in caves”, Russian President Vladimir Putin told delegates at the VTB Russia Calling investment summit on November 20, as took at swing at most forms of alternative energy, as cited by Kommersant.

The Russian energy balance is one of the greenest in the world due to the use of hydropower, nuclear energy and gas generation, Putin added, before going on to extol the value of traditional forms of fossil fuels.

“Neglect of such a pure hydrocarbon as gas, in my opinion, is absolutely strange. When promoting ideas of [of the complete rejection of hydrocarbons] it seems to me that humanity can again find itself in caves, but only because it will not consume anything. If this is how all energy can be reduced to zero or just rely on the energy of the sun or wind, or tides, then, you know ... Today the technology is such that without hydrocarbon raw materials, without nuclear energy, without hydropower, mankind will not be able to survive, save his civilisation,” Putin said in his tradition keynote session at the annual event.

However, Putin conceded that it was necessary to develop renewable energy sources that, "will preserve nature for many millennia ahead for future generations."

Russia ratified the Paris Climate accords in September and has begun introducing a comprehensive sustainable energy strategy, but the programme announced in October has been seriously watered down by the business lobby.

Putin went on to lambast modern methods of producing shale oil and gas, calling them "barbaric".

“As for shale oil, let us wait for the Americans to spend money on new technologies for the production of shale oil, and then they have a scratch prong — let's see if we are interested in this today or not — and we will buy it cheap,” the Russian president said, adding that he was joking.

He explained that Russia is following the development of these production methods, but they are destroying the environment. “In some areas where shale oil is extracted, citizens do not get water from the tap, but black slurry. Despite all possible economic advantages, such production, we do not need, we will never go for it. We have opportunities both off the shelf and those we can develop ourselves, so there is no rush,” Putin said.

Gas crisis: Can Europe store enough gas this summer to get through the winter?