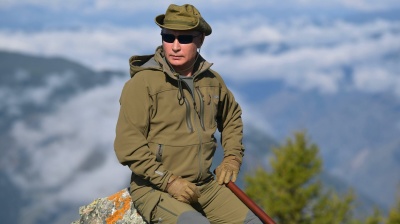 Vladimir Putin's "trust rating" has fallen again. It was down to 39% in September from 40% in June, after a summer of violent protests over the Moscow City council election that saw unprecedented police brutality, independent pollster the Levada Center reported on October 16.

Trust in the president has been sliding in the last few years as Russia is in its sixth year of falling real incomes despite the ongoing economic recovery and improving profitability of both the leading corporates and banks.

Trust in Putin was at a peak of 59% in November 2017, however, despite the fall Putin remains, by far, the most trusted political figure in Russia. The next most popular politicians are foreign minister Sergei Lavrov and Defence Minister Sergei Shoigu, both with 14%.

And Putin’s trust rating may get a bump in the next survey as Rosstat just reported that real incomes were up 3% in the third quarter, the first positive result in years. However, some eyebrows were raised as the increase was partly due to a revision of previous results by Rosstat which have produced several surprises in the last year thanks to dramatic upward revisions of official data that have undermined its creditability.

The anti-corruption blogger and opposition activist Alexei Navalny enjoys the trust of a mere 3% of Russians in the polls among Russians despite being the darling of the international media.

While Putin’s trust rating slid his popularity rating remains sky high and crept up one percentage point in September to 68% from 67% a month earlier. His disapproval rating remained the same at 31% over the last two months with another 1% unsure. (The numbers don't add up to 100, due to rounding errors.)

The regional governors continue to enjoy almost as much approval as Putin and even saw their approval tick up 2pp in September to 63% from 61% a month earlier. Governors' disapproval was 34% in September and another 3% couldn't answer, according to Levada. The highest the governors have ever scored was 68% October 2014.

In general the majority (49%) of Russian still believe the country is going in the “right direction” according to Levada, but 41% believe it is going in the wrong direction, with 10% unsure. Still, the right direction metric is still off its all time peak of 64% set in July 2015, following the euphoria and national “we’re back” pride that followed the annexation of Crimea in 2014.

Finally the propensity to protest jumped sharply over the summer with 30% of Russians saying it was possible that they would participate in protests with political demands and 34% saying the same in protests with economic demands in August. Those numbers were up from 24% and 26% in June but not as high as the 34% and 41% set in July 2018, which remains the recent peak measurement of frustration amongst Russians.

Moreover, while dissatisfaction amongst average Russians is clearly rising and they are thinking about protesting the number of Russians that say they will definitely participate in protests has remained largely unchanged. Indeed, the number of those that said they definitely participate in political protests was down 2pp to 20% in August from 22% in June and in the case of economic protests it remained unchanged at 27% over the same period.

One possibility for these separate trends between possible participation and determined participation could be the level of brutality and the random arrests by police at this summers’ protests.

For the Kremlin these rising levels of discontent represent a serious political problem, but at the same time the stability of the number that are determined to act also says the Kremlin still has time to deal with the social discontent. September rising incomes and the acceleration of economic growth from the spending on the 12 national projects that is expected to kick in over the next six months may go some way to ameliorating these frustrations.