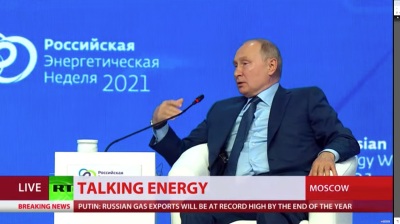 Russian president gave a long interview at the Russian Energy Week conference and highlighted the market forces that are driving the current gas crisis, blaming the shifts to renewables as a major cause.
By bne IntelliNews October 13, 2021

Low wind power output in Europe has played a role in causing the current gas supply crisis in Europe, Russian president Vladimir Putin said in a speech on October 13.

"Over the last decade, the capacity of renewables has increased in Europe. this might be a good thing," Putin said at the plenary session of the Russian Energy Week in Moscow. "But because of shortages in wind turbine production, the European market faced an energy deficit, which led energy prices to spike. And this triggered an increase in gas prices.”

Russia has been criticised for exacerbating the gas crisis by withholding some supply – whether to put pressure on the EU to allow Nord Stream 2's launch, or simply to drive up prices. However, Putin insisted that Russia complied with its contractual supply obligations in full.

As bne IntelliNews reported, market forces have played a major role in driving up gas prices to a historical level this year thanks to a steep “V” shaped market in demand and constrictions on supply due to technical limitations on Russia’s ability to deliver gas to Europe have also contributed to the crisis. Putin pointed out that demand for gas in Russia is also very high as it is also scrambling to fill its own storage ahead of the winter’s heating season.

Higher prices for energy in Asia have also drawn off much of the LNG supplies that could have alleviated the shortages, the Russian president said, exacerbating the crisis.

And adding to demand, some European countries also failed to stockpile enough gas in the summer months ahead of the winter heating season, he said. Putin also blamed the shift towards spot trades and gas hub pricing and away from long-term, oil-indexed supply contracts that provide greater price stability.

"It's like people don't see the numbers and don't see the reality, or they are just covering their mistakes over the last decade," Putin said. "The European energy system is filled with vulnerabilities and this caused the crisis on the market.”

He said that such shortages in Russia were inconceivable, noting that Russian households were shielded from spikes in energy costs by price regulation.

The president reiterated that Russia was ready to work with its European partners to improve the continent's energy security, but made it clear that the EU members that want to increase supplies beyond the existing agreements need to sign off on long-term contracts and implied that Russia was not prepared to simply make more gas available on the spot markets.

“We have to understand how much our partners in Europe want to buy,” Putin said.

Turkmenistan: A strong and stably economy