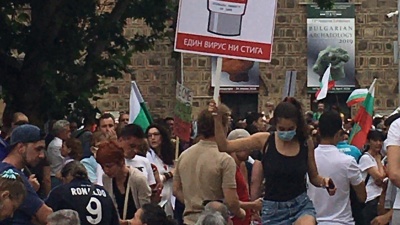 "One virus is enough" says a placard at the latest protest in Sofia.
By Denitsa Koseva in Sofia July 14, 2020

Tensions escalated in the sixth day of protests in Bulgaria after a group — suspected of being provocateurs — attempted to break into the parliament building but were stopped by the police.

The protest gathered between 20,000 and 40,000 people in the capital Sofia and thousands more went out on the streets in 17 other towns.

The rallies demanding the resignations of chief prosecutor Ivan Geshev and the government of Prime Minister Boyko Borissov took place hours after Geshev initiated a treason investigation targeting fugitive gambling mogul Vassil Bozhkov. He accused Bozhkov of paying for the protests in an attempt to put pressure on the prosecution, which has already charged him on 18 counts.

The accusation was rejected by protest organisers, who also called on politicians and parties not to use the protests for their own ends.

“Geshev wants us to believe Bozhkov selectively. When he says he has given money to ministers and those in power – to not believe him, but when he talks about paying for the protest – to believe him,” Nikolay Hadzhigenov, human rights lawyer who is among the organisers of the protests, said as quoted by Dnevnik news outlet.

“BSP, DPS, Bozhkov, Slavi, Maya, Tsvetanov, do not try to ride us, we don’t want you either,” one of the posters in the protest said, a reference to the opposition Bulgarian Socialist Party (BSP) and Movement for Rights and Freedom (DPS) parties, and other political figures.

“Anti-mafia, one virus is enough,” was another slogan at the July 14 rally.

The tensions quickly subsided and the rally ended without arrests. However, a young man and a policeman were wounded.

Meanwhile, protesters managed to hang up a sign “For sale” on the facade of the parliament.

Although these are the biggest mass protests in Bulgaria since 2013, the government and Geshev say they will not resign. Borissov said his government will stay to deal with the heavy financial crisis set to hit the country due to the coronavirus (COVID-19) pandemic.

However, political analysts say Borissov should resign if he wants his party to survive and believe his survival instinct will force him to do that.

Others believe Borissov will try to stay in power until the regular general election next spring.

Meanwhile, journalists and artists have called on Emil Koshlukov, the head of the public broadcaster BNT, to resign, accusing him of dependence on those in power and a lack of solid professional qualities.

Standoff at the barricades in Bulgaria

COMMENT: Why the Balkan region should be on investors’ radar screens
ING analysts warn of L-shaped recession in Bulgaria
Standoff at the barricades in Bulgaria