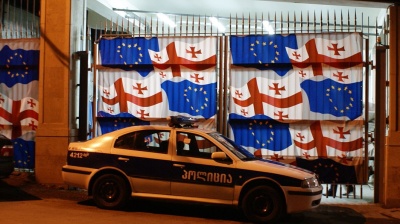 The EU's delegation in Georgia and US Embassy in Tbilisi released a joint statement saying that they recognised "the deep disappointment of a wide segment of Georgian society" over the voting system issue.
By Iulian Ernst in Bucharest November 19, 2019

Police in Tbilisi on November 18 used water cannons to dislodge protesters that had barricaded the entrance to Georgia’s parliament. Activists’ tents were removed and leaders of the ad-hoc “It’s a Shame” protest movement were arrested along with dozens of others.

Organisers of the rally called on the demonstrators not to resist the riot police operation to drive them away. Live broadcasts showed demonstrators huddled together in large groups as they were sprayed with water at high pressure.

The interior ministry said that six people, including two police employees, were injured during the clearing operation and that 37 people were detained. The rally resumed later in the evening, with civil society representatives and opposition leaders addressing the crowd in front of the parliament building and calling for protests to continue until demands were met. The previous day around 20,000 people gathered in central Tbilisi in a peaceful demonstration against the refusal to change the voting system.

Lawyer George Oniani briefed news outlets that he would represent 37 of the detained protesters who were to be put on trial at a Tbilisi court on charges of disobeying police and for hooliganism.

“It’s a Shame”, which has been rallying under the slogan “Do not dare!”, wants the government to resign and lawmakers to pass a law bringing in the proportional voting system for an election to be held as soon as possible.

Movement leaders Giga Makarashvili and Zuka Berdzenishvili, as well as Zura Japaridze, leader of the political party "Girchi", were arrested outside parliament during the dispersal of the protesters.

"Police urge all citizens to obey the requirements of the law. The ministry of internal affairs will respond appropriately to each fact of offence and all violations will be followed by appropriate measures by the police,” a statement from the ministry read.

Tbilisi Mayor and influential member of Georgian Dream, Kakha Kaladze, said that the government “is holding off on any new initiatives pertaining to the electoral system" since there was not enough legislative time left to deal with such an issue in advance of the scheduled general election.

The ruling party-proposed bill aimed at bringing in a proportional voting approach to the 2020 parliamentary elections was scrapped on November 14 after 40 Georgian Dream lawmakers in the 150-seat parliament, who initially supported the legislation, declined to back it.

Sozar Subari, an adviser to Prime Minister Giorgi Gakharia, subsequently argued in favour of the majority voting system, saying it was “more in line with the historical arrangement of Georgia”.

However, 78% of the Georgian population, who had heard about the proposed transition to a fully proportional voting system, supported the change, according to a poll commissioned by the International Republican Institute (IRI).

According to IRI, the fieldwork for the study was conducted by the Institute for Research and Marketing (IPM) from September 11 to October 14. The research was co-ordinated by Rasa Alisauskiene, a representative of the research company Baltic Studies/Gallup Organization, commissioned by the Center for International Republican Studies.

The European Union's delegation in Georgia and the US Embassy in Tbilisi released a joint statement saying that they recognised "the deep disappointment of a wide segment of Georgian society" at parliament's failure to pass the constitutional amendments to change the voting system.

"We consider it essential to immediately work to restore trust through a calm and respectful dialogue between the government and all political parties and civil society with a view to finding an acceptable path forward," they said in the statement.

The results of further polling commissioned by IRI have shown that while Georgian Dream, led by the country’s sole billionaire, oligarch and ex-PM Bidzina Ivanishvili, remained the most popular single party in Georgia, it was losing support even before the blocking of the voting system legislation.

The deterioration in the economic situation of households, felt particularly keenly by voters because inflation is accelerating, was a key driver in the loss of popularity besides what was broadly seen as the disproportionate action of the police against protesters during the June 20-21 rallies in which some demonstrators lost eyes after being hit by rubber bullets. Addressing economic issues might be an opportunity for parties eager to capitalise on the large share of undecided voters, IRI observed.

The first IRI national poll conducted in Georgia since the anti-Kremlin demonstrations in June indicated “a continued deficit of trust in the government”.

No party has a clear lead with voters in advance of the 2020 election, but there is potential to make headway with voters by addressing economic issues which continue to be the top national concern for citizens, IRI commented. One third of voters have no preferred party at this moment.

According to the survey commissioned by IRI, if the parliamentary elections were held tomorrow, 23% would vote for Georgian Dream, while United National Movement (UNM) would get 15% of the vote while its close ally European Georgia – Free Democrats would take 5%. Scores of other substantial parties included Labor Party (5%) and Patriots Alliance (4%). Smaller scores were posted by Civil Movement (3%), New Georgia (2%), Democratic Movement-United Georgia (2%) and Lelo (2%).

As regards households’ economic situation, 43% said it was bad and 17% said it was very bad, while 37% felt it was good and 2% very good.