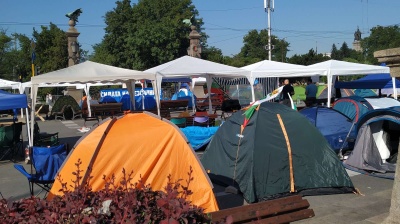 The Eagle's bridge in Sofia, the site of a blockade and protest camp.
By bne IntelliNews August 14, 2020

Anti-government protesters in Bulgaria stepped up their blockades of major road infrastructure on August 13, blocking important bridges as well as a critical crossroads in Sofia.

Hundreds of thousands of Bulgarians across the country and in several other states have been protesting for over a month now, demanding that Prime Minister Boyko Borissov’s government and chief prosecutor Ivan Geshev resign. The protests reflect many Bulgarians’ anger over widespread corruption in the country and collusion between politicians and businessmen.

As well as taking to the streets and blocking roads, protesters set up a protest camp in central Sofia, returning and pitching their tents again after they were removed on August 7.

In the latest day of protests, the Danube bridge where Bulgaria has a border checkpoint with Romania was blocked, as was an important bridge in the Black Sea city of Varna. Protesters who blocked the bridge were carrying posters saying the state is “under reconstruction”.

Two musicians gave a classical music concert at the Eagle's bridge in Sofia, the site of a blockade and protest camp.

A major crossroads in Sofia, which was used after the Eagle's bridge crossroads was blocked, was also blockaded, which is expected to cause serious problems for the traffic flow in Sofia.

The protests started 36 days ago when opposition politician and former justice minister Hristo Ivanov published a video in which he was pushed into the water by guards from the state security services when he tried to approach the summer villa of influential politician Ahmed Dogan.

The incident highlighted the influence Dogan – whose Movement of Rights and Freedoms (DPS) is formally in opposition, meaning he is not entitled to protection by the state security services – and other members of the DPS have over Borissov’s government.

A cabinet reshuffled initiated by Borissov failed to end the nightly protests and calls for his entire government to resign.

MPs were supposed to hear Borissov and debate an opposition motion on the budget on August 13, but it was cancelled as only 78 MPs attended, not enough to form a quorum.

Outside the parliament, protesters voted their no-confidence in the government and threw tomatoes and eggs at the parliament building.

Protesters also gathered in front of the Belorussian embassy to show solidarity with people in the East European country where President Alexander Lukashenko has sought to crush protests against his victory in the rigged August 9 election.

Turkish lira finds another all-time low with Erdogan’s Caucasus adventurism no help at all
11 hours ago
Head of MS Estonia tragedy investigation says ship went down after collision with submarine
20 hours ago
Armenia accuses Turkey of sending in direct military support for Azerbaijan including F-16s
20 hours ago
Bucharest mayoral race win puts reformist USR in strong position ahead of general election
1 day ago
Belarusian police use stun grenades, pepper spray and fire shots to control Sunday's mass rallies
1 day ago