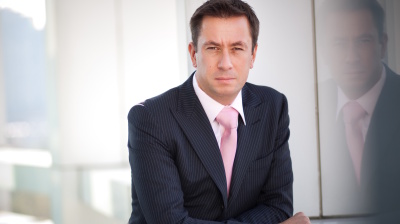 Dmitry Konov, the former CEO of Russian petrochemicals manufacturer Sibur, is filing an appeal against the sanctions placed on him by the European Union, according to a statement from the European Court of Justice.

Konov is not the first Russian to contest the sanctions brought against him. Recently, the former head of Alfa Bank and LetterOne Group Pyotr Aven announced that he would also appeal against his sanctions by the EU, describing them as “spurious and unfounded”.

Konov is part of a group of executive innovators who have reformed post-Soviet private companies into high-performing players. Their inclusion in the sanctions list, alongside oligarchs and the bosses of state companies, is more controversial, as they argue they are not complicit in the system and have nothing to do with its war in Ukraine.

A year ago, Konov was seen as one of the most successful executives in the global petrochemicals industry. He was preparing Sibur, Russia’s leading plastics manufacturer, for an IPO which could have valued it at upwards of $22bn. Konov had made a name for himself by pushing for Western ESG standards and modern disclosure and management practices, and had struck partnerships with foreign companies.

Then in March 2022, he was added to the EU sanctions list. After 15 years at the helm, Konov was forced to step down from his role as CEO of Sibur.

Unlike the 30 or so oligarchs who face sanctions from the EU, Konov is a career executive. As such, his media history is substantial, and the trajectory of his career – from young investment banker to CEO – can be easily traced. Konov also gave an exclusive interview to bne IntelliNews in 2018 in which he explained the company’s production processes, discussed the outlook for the petrochemicals sector and talked about the company’s newest facility. Here’s an overview of Konov’s career to date, based on what’s been written about him.

Born into a family of geologists in Moscow, Konov started off in emerging Russian investment banks such as Renaissance Capital. He got his big breaks at Yukos Oil Company and Bank Trust, the cornerstones of Mikhail Khodorkovsky’s business empire. Khodorkovsky fell out with Putin at around the same time, and was subsequently jailed on charges of fraud and embezzlement.

Konov has always been regarded as a patient businessman. When he applied for a job in a London bank in the 1990s, the employer deemed him “boring” in comparison to other candidates, Konov recalled in an interview with TASS. In 2001, in an effort to expand his international horizons, he completed an MBA at Switzerland’s IMD Business School.

Konov knew little about the petrochemicals industry in 2004 when he joined Sibur as a fresh-faced 34-year-old. “I realised at one moment that I would never be able to understand all the chemical reactions, so I quit trying,” Dmitry Konov told the Financial Times in an interview in 2018. “I know what products go to each industry and the economics of each process. That’s enough for me.”

On the other hand, his time working in corporate finance at Bank Trust gave him the skillset he needed to go about restructuring the business. Having hopped about between roles at Sibur – working as adviser to the CEO, VP for strategy, and senior VP for business development – Konov was appointed CEO in 2006. With the help of a skilled management team, he transformed Sibur from a backward company in a pollution-heavy industry into a leading petrochemical producer and one of the first Russian companies with a sustainable development strategy.

Sibur had $2.5bn of debt when he joined, and was comprised of several dozen Soviet-era factories processing oil and gas products into various, often low-margin, chemical products. Under the re-structuring, Sibur sold off its lower-margin assets including mineral fertiliser plants and tyre factories, focusing instead on higher-margin products such as polymers. Sibur’s revenue grew from about $3bn in 2004 to nearly $16bn by 2021.

“We purchase by-products from oil and gas companies – associated petroleum gases (APG) from oil companies and natural gas liquids (NGL) from gas companies – collect them from the production site, bring them into one pipeline and process them into polymers and other products,” Konov told bne IntelliNews in 2018.

Sibur breaks these by-products down into their constituent parts, all of which can be used as fuel or to make one product or another. Polyolefins can become medical products, films or packaging, while elastomers can be used to make car tyres. 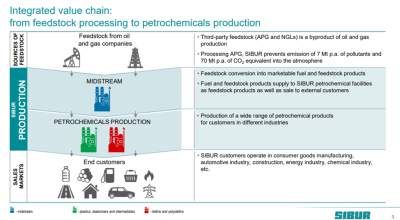 Until recently, the most profitable product was liquified petroleum gas (LPG), a cheaper alternative to petrol in cars. Sibur exported more than 3mn tonnes per year (tpy) of LPG until Konov and his team decided that they could add more value by processing LPG and naphtha into plastics.

Sibur also forged a number of international joint ventures under Konov’s stewardship, including with Chinese state-owned energy giant Sinopec, Belgium’s Solvay Group and India’s Reliance Industries. Sinopec bought into one of Sibur’s synthetic rubber plant in Krasnoyarsk, while a PVC plant near Nizhny Novgorod is a collaboration with Solvay Group.

Sinopec and China’s Silk Road Fund each bought a 10% stake in the company in 2015 and 2016 respectively. This was followed by a $500mn eurobond issue in September 2017, giving it ample funds to ramp up production.

Over the last decade, Sibur has spent more than $21bn upgrading existing production facilities and building new ones. Most notably, the company built a polyethylene and polypropylene facility called ZapSib in Tobolsk. In 2020, at a time of negative ruble pricing dynamics coupled with the initial shock from the coronavirus (COVID-19) pandemic and the oil price collapse, Sibur was insulated by the new ZapSib plant, which helped revenue in the olefins and polyolefins segment grow by over 30%. Sibur is now one of the EU’s largest suppliers of these plastics – used in everything from packaging and healthcare to car manufacturing.

Beyond growing profits, Konov has been a rare voice calling for improved corporate citizenship in Russia. During the coronavirus pandemic, Sibur kept the prices for medical-grade polymers at their minimum levels to ensure the supply of disposable PPE to healthcare facilities. It also provided over 40,000 epidemiological kits to regions where it operated.

Konov also leaves Sibur with a transformed approach to the environment. In a country where the ESG agenda is yet to gain traction, Sibur has committed to take part in recycling 100,000 tpy of polymer waste by 2025. It is also building production to make PET granules containing recycled materials at one of its units.

Sustainalytics ranked Sibur among the top 1% of companies with the lowest ESG risk in the global petrochemicals industry. In 2021, MSCI upgraded the ESG rating for Sibur to ‘BBB’ from ‘BB’, while Forbes named Sibur as one of Russia’s 30 most eco-friendly companies. Konov himself made it onto the ICIS list of top senior executives with the biggest impact on their companies and the industry, alongside managers from the likes of Dow and Solvay.

Just as rumours were beginning to circulate that Sibur could have an IPO in the pipeline, Konov’s time with the company was curtailed when Western sanctions aimed at forcing Putin to end the bloodshed in Ukraine were expanded to incorporate high-flying executives as well as oligarchs.

Konov joins a club of other top Russian managers who have been sanctioned and have been forced to step down. Alexander Shulgin, former CEO of Russian e-commerce major Ozon (often described as Russia’s answer to Amazon), was also sanctioned, and had to step down in April. Oleg Tinkov, owner of the world’s biggest digital bank Tinkoff, has also been sanctioned by the UK in spite of his openly anti-war stance.

The stated reason for personal sanctions against Konov is that Sibur is “closely connected with the Russian government”, for which it allegedly serves as a revenue stream. But much of Sibur’s tax revenue goes not to the federal budget, but rather to the regional and local authorities in the places where it operates, in accordance with Russian law.

Although Sibur itself was not sanctioned, Konov decided to step down and pass management duties on to his team after personal sanctions were introduced against him. In the current circumstances, the company is unlikely to do an IPO in the foreseeable future. Sibur keeps exporting its products where possible, and is looking for ways to complete construction of its $10bn Amur facility.

When asked by Vedomosti about his reaction to the possibility of further sanctions against Russian businesses in retaliation for Putin’s actions in Ukraine, Konov remained phlegmatic. “We are focused on what we can influence – improving efficiency, marketing, investments, etc, and we perceive what is beyond our control as just another external challenge,” he said.