President says Moldova not under threat despite latest Transnistria blasts 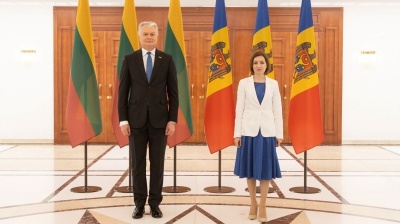 Moldova's President Maia Sandu at a joint press conference with the President of Lithuania Gitanas Nauseda. / presedinte.md
By Iulian Ernst in Bucharest May 9, 2022

The Republic of Moldova is not in danger, but the authorities remain vigilant, said President Maia Sandu, quoted by Deschide.md, during a joint press conference with the President of Lithuania Gitanas Nauseda.

Her statement followed a series of provocations in separatist region Transnistria and pro-Russian initiatives by lawmakers in the autonomous Gagauzia region.

In the latest development in the Moldovan separatist region of Transnistria, there were four explosions on the night of May 7-8 in Ribnita district, after explosive devices were dropped from two drones. The accidents did not result in casualties.

Sandu stated that the explosions targeted a non-functioning military aerodrome near the village of Vărăncău.

"The explosions took place between 22:00 and 22:50. There are no registered human casualties. We understand that these explosions were caused by a drone. They targeted the runway of the non-functioning airfield. Our competent institutions still collect information. When we have more details, we will return," said Sandu.

"Our analyses and those of our partners show that, today, the Republic of Moldova is not in danger. But we remain vigilant. The priority of the authorities is to keep the peace, life and security of the citizens,” said Sandu.

The Moldovan authorities are closely monitoring developments, and state institutions are working hard and doing their best to prevent the destabilisation of the situation in Moldova, Sandu said.

Moldova’s prime minister Natalia Gavrilita expressed the same views in an interview given to Radio Free Europe, adding that Moldova is a neutral state that has never sought Nato membership. She also implied that the Moldovan authorities expect support from the European Union and Romania in case the stability comes under threat since a large part of the country’s residents have double citizenship: Moldovan and Romanian.

In the autonomous Gagauz region, lawmakers voted on the night of May 8-9 to legalise the use of the St. George ribbon — a symbol banned by the central authorities for its links to the war in Ukraine.

On the same occasion, Gagauz lawmakers wrote a letter to Russian President Vladimir Putin and the Russian authorities, asking for preferential gas deliveries, according to Newsmaker.md.

“The Russian people have always extended a helping hand and provided the necessary support at critical moments when the situation seemed hopeless,” the letter reads. The deputies said they believe that it is necessary to “supply gas to Gagauzia at a special price or on a free basis in the form of humanitarian aid.”

The developments are linked to the pro-Russian lawmakers of the legislative body in the territory inhabited by not much over 100,000 residents. As bne IntelliNews has reported, many Gagauzians are pro-Russian despite the region welcoming large numbers of refugees from Ukraine.