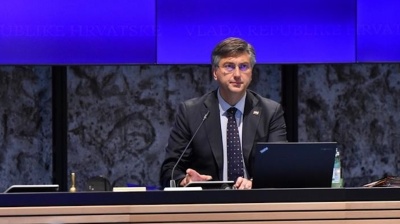 The centre-right HDZ has won 66 seats in the 151-seat parliament — not far short of an absolute majority — showed preliminary results published early on July 6 with over 95% of votes counted, state news agency Hina reported.

This delivers the expected hung parliament, but gives the HDZ a clear advantage as it embarks on coalition negotiations.

Speaking as the results came in Plenkovic said voters had bestowed as great obligation on his party.

"We had a difficult mandate full of challenges behind us and the challenges ahead of us are even greater," said the prime minister, AFP reported.

This is a considerably better result for the HDZ than indicated by most pre-election polls, which put the party virtually level with its main rival the Restart Coalition led by the Social Democratic Party (SDP).

Preliminary results, however, indicated the Restart Coalition is on track to take just 41 seats in the parliament. SDP leader Davor Bernardic said he is ready to step down after the poor result, and the party will discuss the issue on July 6.

The right-wing Homeland Movement led by folk singer and former presidential candidate Miroslav Skoro was on 15 seats, with Most gaining eight seats and the Green-Left Coalition Led six, according to the preliminary result.

In the previous parliament, the HDZ had 55 seats, and ruled in coalition with the Croatian People's Party (HDS), backed by several small parties and independents.

The pressure will now be on for Plenkovic to form a new government speedily to ensure there is stable leadership in place to steer Croatia through the coronavirus (COVID-19) pandemic and economic recession.

Croatia is forecast to be one of the worst hit – if not the worst hit – economy in the emerging Europe region, mainly due to the large contribution of tourism to its GDP. The World Bank forecast a contraction of as much as 9.3% this year. The European Bank for Reconstruction and Development (EBRD) cut its forecast for Croatia’s GDP growth this year to a softer contraction of 7.0%.

The HDZ campaigned under the slogan 'Safe Croatia’ –presenting Plenkovic as a safe pair of hands to steer Croatia through the crisis.

At the start of the electoral campaign, Croatia appeared to have successfully contained the virus, reporting no new cases or almost none daily for weeks in May and June. Towards the end of June the number of new cases increased sharply, in line with an upturn in neighbouring countries. However, this does not appear to have dented Plenkovic’s standing with voters, who chose to stick with the HDZ.

Croatia’s retail trade up 14.3% y/y in March as shopping habits return to normal