Controversial Ukrainian oligarch Dmitry Firtash, who is fighting extradition to the US on bribery charges, has launched a heavily-promoted reform initiative for Ukraine, aiming to book $300bn in investments for its beleaguered economy. But the initiative, heavily promoted in the Ukrainian media, appears to have sparked a backlash.

Firtash, who has controversially made billions of dollars in the murky energy trade between Russia and Ukraine, held an investment forum "Ukraine Tomorrow" in Vienna on March 3, attended by a cast of EU luminaries, including former German finance minister Peer Steinbrück, current Austrian Foreign Minister Sebastian Kurz, UK politicians Lord Mandelson and Lord Risby, and former South African president F.W.de Klerk, according to the programme and press release.

In his fight to avoid extradition to the US, Firtash is looking to secure support in Ukraine and Europe by promoting Ukraine's integration with the West, say analysts.

Firtash was sensationally arrested at the request of the FBI in Vienna on March 12, 2014, three weeks after the ousting of his then ally, former Ukrainian president Viktor Yanukovych. The US is seeking to extradite Firtash over involvement in an “alleged international corruption conspiracy” dating from 2006, on the basis of a sealed grand jury decision of July 2013. Firtash has claimed that the charges are the result of political tensions between the US and Russia. Firtash's gas business has been closely linked to Russian state gas company Gazprom. There is still no indication as to when Austria will decide on the US extradition request, with Austrian media accusing the authorities of dragging their feet over processing the request.

Analysts see Firtash's investment initiative as largely a PR ploy connected to his fight against extradition. Firtash named a headline-grabbing figure of $300bn that his modernisation plan could help attract to Ukraine, without explaining how the figure was calculated. The modernisation plan will be developed by a newly created "Agency for the Modernisation of Ukraine” (AMU), according to the press release.

“In 200 days Ukraine will get a master plan for the complex modernisation of the country,” reads a press release summarizing the event, as published by Interfax Ukraine. “The reforms will cover Ukraine's economy, trade, law enforcement and justice systems, the process of integration with the EU, health system, anti-corruption, financial sector, and trade [sic], and will also include propositions for constitutional reform.”

"We have 200 days and much work ahead of us,” high-profile Kremlin critic Bernard-Henri Lévy and co-founder of the AMU said, according to the press release. “If we succeed in implementing the Modernisation Program… its economic results will be comparable with the Marshall Plan.”

Underlining the PR role of the Firtash event, identical articles based on the press release appeared across dozens of internet publications in Ukraine on March 3, mostly under the bombastic heading: “Firtash will lead Ukraine's rebuilding”.

But in a sign that Firtash has powerful enemies in Ukraine who are irked by his attempts to grab the limelight, some media invitations to the conference that were circulated to international journalists such as bne IntelliNews were hoaxes, spinning it as an event that would be anti-Western, blaming the crisis in Ukraine on the EU.

Invitations circulated by a London PR firm with the email domain @theproffice said that the event was “to consider the West's negative interference” in Ukraine. “Dmitry Firtash… is keen to highlight what he sees as the tremendously negative impact that the US, EU and other western allies have had on the economic and political progress in the country,” the invitation said, offering to arrange interviews at short notice with Firtash.

“A new narrative is starting to gather pace inside Ukraine,” the blurb continued. “It takes great issue with the role of the West in undermining the Government of Mr Yanukovich and for sowing the seeds of discontent that led to the revolution in early 2014.”

In comments to bne IntelliNews, the London PR firm in question denied that they had been the target of a prank. “Mr Firtash’s availability for interviews is very real,” the firm said, while acknowledging scheduling problems. Firtash's holding company Group DF did not respond to a request for comment.

Market insiders sense the hand of a rival oligarch, such as Ihor Kolomoisky, in the apparent prank, probably intended to cast a shadow over Firtash's PR blitz. Kolomoisky, famous for his impish sense of humour, is the owner of Privat Bank, Ukraine's largest bank, and competes with Firtash in the energy sphere. Kolomoisky and Firtash are waging a bitter PR war against each other via their respective TV channels, 1+1 and Inter, according to Ukraine's media watchdog Telekritika. Kolomoisky's office did not comment on any connection to the prank.

Firtash was a core supporter of the now-discredited Yanukovych administration and its pro-Russian drift. But since Yanukovych's ousting in February 2014 after mass street protests and his own arrest in Vienna, he has disassociated himself from Yanukovych, and vociferously backed the pro-EU administration of Petro Poroshenko.

Kolomoisky, on the other hand, was seen to favour the pro-EU opposition to Yanukovych from the outset, being named governor of Dnipropetrovsk region only days after Yanukovych's ousting. 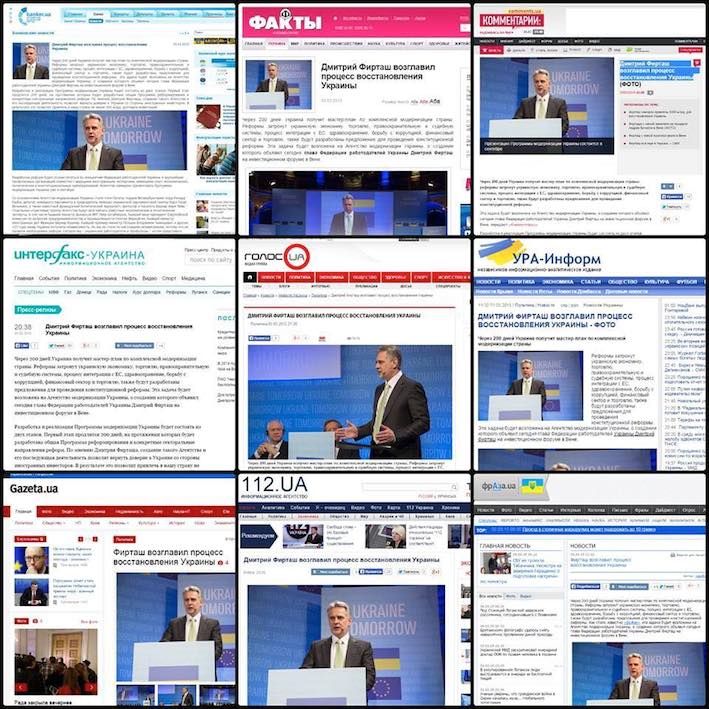