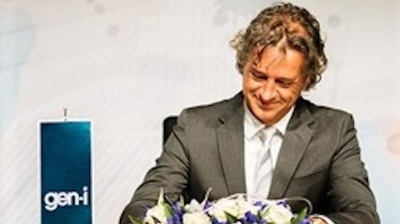 Golob is seen as the most serious rival of Prime Minister Janez Jansa in the upcoming general election, having received the biggest support among political leaders in the latest opinion polls.

In addition to the new leadership, the party's congress also changed the party's statute, 24ur.com reported.

Golob, who appeared in public for the first time as president of the Freedom Movement, was cited as saying that they deliberately chose the term "movement" for the name, as they want to show that they are not an "ordinary or classic party".

He also introduced his team. At the party's congress, the members elected a new vice-president, Urska Klakocar Zupancic, while Matej Arcon has been appointed general secretary. Mirta Kozelj has been nominated for president of the party's council.

"Today we have established a platform and we invite everyone to join us," Golob was quoted as saying, adding that he believes that the team will grow in the coming weeks as new people join the movement every day.

Golob said that the party will hold an election convention and congress in March, when a list of candidates for the election will be presented.

Speaking about the party's programme, Golob said that the climate agenda is among top priorities.

"I believe that the climate agenda is the most crucial for the future of Slovenia and especially our children. That is why it remains in the first place," he said, adding that he health crisis with COVID-19 will also be tackled.

"I can proudly say that, in addition to the climate agenda, we will strive for respect of freedom, democracy and the restoration of the rule of law," said Movement Freedom vice president Klakocar Zupancic.

Golob, according to his former employer GEN-I, is one of the leading experts in electric power generation and supply in Slovenia. He served as secretary of state for energy from 1999 to 2002, after which he founded and headed up Istrabenz-Gorenje, d.o.o. (now IGES). He took over as president of the management board at GEN-I in 2006.

Earlier this month, Slovenian President Borut Pahor said that he will schedule the general election for April 24, after most of the parliamentary parties agreed to this date.

The election is seen as a test of the popularity of the government led by Jansa’s rightwing Slovenian Democratic Party (SDS).

In September 2021, four opposition parties, List of Marjan Sarec (LMS), Social Democrats (SD), Levica (the Left) and the Alenka Bratusek’s Party, signed a cooperation deal, agreeing to form a government without SDS should they gain enough votes in the next general election.

EU neighbours push for Bosnia to get candidate status