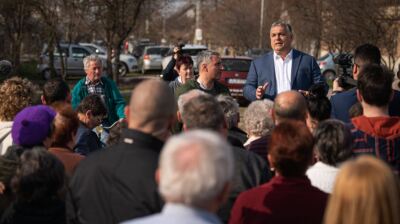 The war in Ukraine seems to have boosted support for the ruling Fidesz party, which leads in all major polls, but analysts note that even with that advantage, it is still too close to call the race in 25-30 battleground districts, which could turn projections upside down.

In its last poll released before the April 3 election, Median said that 40% of the voting-age population and 50% of respondents with a clear party preference expressed support for Fidesz, which represents an 8pp and a 10pp lead over the united opposition.

This would translate to 128 mandates for Fidesz of the 199 total, or just five short of the two-thirds majority. This is the most bullish forecast for Viktor Orban’s nationalist government in power, which has ruled for most of the period since 2010 with a supermajority.

One-third of the waverers wanted to see a different government, while another third held the opposite view; the rest were undecided, the survey found. A last-minute decision of voters in this latter category would not change the outcome to the benefit of the opposition, they wrote.

According to the poll, two-thirds of the total population and one-third of opposition voters expect Fidesz to win. In Budapest, Fidesz would garner 27% of the votes, and 45% would go to the opposition, while in the provinces 43% would support the ruling party and 29% the opposition.

Median’s forecast is relevant from the point of view that it gave the most accurate prediction over the last 25 years. There is consensus that this time pollsters have a much tougher task as the election will be decided in individual constituencies, where sympathy for a candidate could tilt the outcome in either way and support may deviate from the national average.

Pollsters have no resources to conduct research locally, but parties are most likely to have their internal polling figures. Analysts can take a cue from what could be the most vital battleground constituencies by observing how campaign activity there evolves at the last minute. There are approximately 25-30 districts where the gap is less than 3-4% between the two blocks.

A recent survey by the liberal Republikon Institute predicts a much closer race that is within the margin of error. Among people polled, 35% support the government and 33% the opposition, while 29% of voters could not pick sides.

Pollster Publicus said 33% of respondents would vote for Fidesz and 31% for the opposition alliance. Publicus gave the most accurate predicton in the 2019 local government election, when Gergely Karacsony scored a stunning victory over the Fidesz-backed incumbent.

A survey by pro-Fidesz Nezopont conducted between March 16-21 found 49% of active voters would choose the conservatives, while 41% would vote for the opposition’s joint list. Some 41% of the opposition alliances’ voter base is undecided, compared to only 4% of Fidesz.

Results of a poll conducted by Zavecz Research show that 45% of those polled would like Fidesz to remain in power and  42% want a change at the helm, with 13% undecided.

The poll revealed that 8% of the voting-age population, or more than 600,000 voters, said they would definitely or probably vote, but did not yet have a party preference. Convincing these people and bringing them to vote will be key to the outcome, said founder Tibor Zavecz.

Pollsters stressed that besides swaying the undecided voters, mobilisation will be key and Fidesz enjoys an advantage in that field. It also has blanket coverage from the state media and the support of virtually all the oligarch-owned outlets.

There is a small likelihood of smaller parties passing the 5% threshold.

Support for the Two-Tailed Dog Party, a satirical joke party popular among young urban voters, was below the ceiling in all polls. Neither would radical rightwing Our Homeland get a mandate in parliament, but some polls put them at 4%.

Voter turnout is expected to be over 70%, near the all-time high of 72% in 2002, when Fidesz lost the election narrowly.

Turkish exports to Russian markets grew 46% y/y over May to July. Some Western capitals said to have requested information from Ankara on its relationship with the Kremlin.

Latest data on Turkey’s trade with Russia sure to irk West
20 minutes ago
Calls for Czech spy chief and interior minister to resign as STAN corruption scandal widens
17 hours ago
Kazakhstan: What next for restive mining village?
17 hours ago
Romanian energy companies report hike in profits
17 hours ago
Albania steps in to help Kosovo avoid electricity rationing
1 day ago