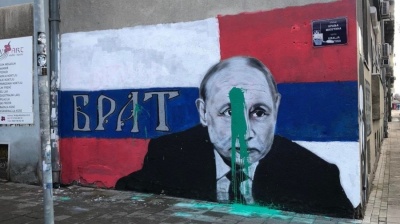 Attitudes towards EU accession in Serbia have changed in the last few months, with interest in joining the bloc waning, a poll from NGO CRTA, the Centre for Research, Transparency and Accountability, shows.

Belgrade’s decision not to impose sanctions on Russia, a traditional ally, has put it in conflict with EU officials and politicians from EU member states. MEPs have called for Serbia’s accession negotiations to be frozen until it falls into line with the bloc on policy towards Russia. This follows years during which citizens and governments in the Western Balkans have been disillusioned by their slow progress towards EU accession.

The survey, carried out in September and early October, found that just 28% of respondents would be glad if Serbia joined the EU, 33% would be “concerned” and 36% indifferent.

Asked how they would feel if Serbia’s accession negotiations were to end unsuccessfully, 43% said they would be indifferent, 35% concerned and 19% glad. 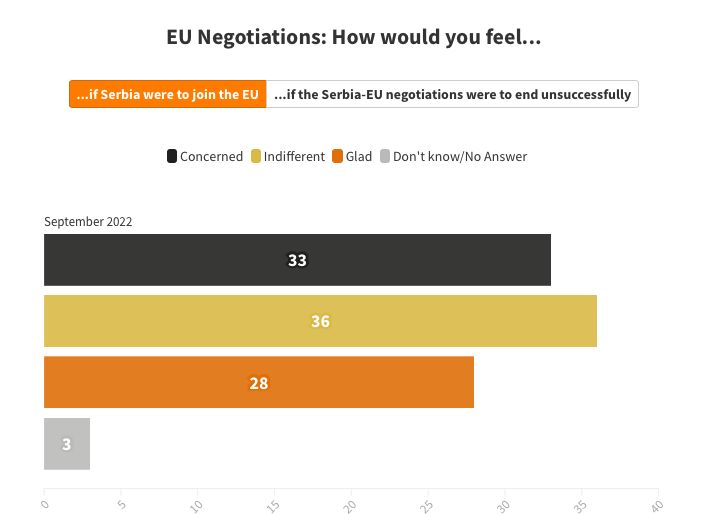 CRTA noted attitudes towards the EU have changed compared to the last public opinion poll in May, which it says was most likely influenced by local media reporting.

“There is a noticeable rise of indifference towards EU integration,” it said. “Data from this research should be observed through the lens of the media ambience in the country – most of the citizens use pro-government media outlets to keep informed about the socio-political situation. According to CRTA’s findings, anti-Western narratives dominate these media.”

A majority of Serbians still support Russia in the war in Ukraine, but the share of Serbians who sympathise with Ukraine has increased since September, the same poll shows.

At the same time, there has been a small rise in the respondents who favour imposing sanctions on Russia, which is now backed by one respondent in five.

Until now the government has refused to impose sanctions on Russia, and politicians who back the idea face a popular backlash.

The latest poll carried out in September showed that if they had to choose a side in the war, 58% of respondents would pick Russia, down from 66% in May. 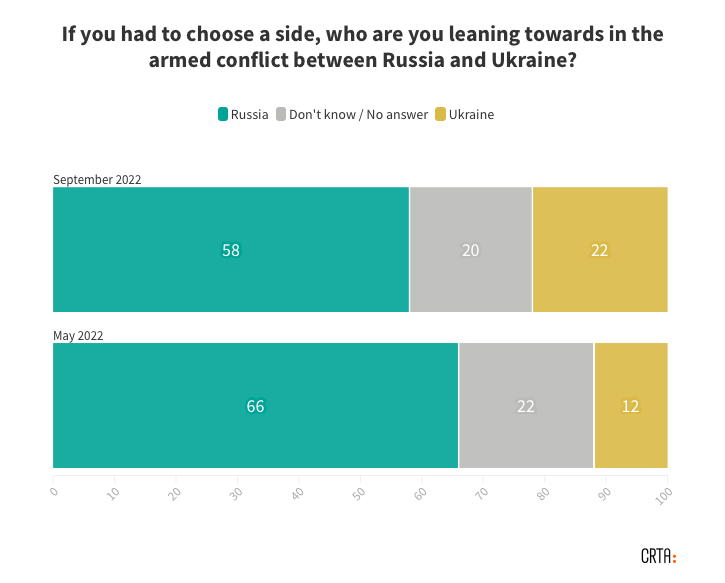 The majority of Serbian citizens (64%) still believe that the West is the most responsible for the war in Ukraine.

61% of respondents consider Serbia needs to preserve good relations with Russia, even if that means giving up the EU, CRTA said.

An overwhelming majority of respondents are concerned about the impact of the war in Ukraine on their standard of living.

93% expect the winter to bring a new surge in grocery prices, and higher electricity and fuel prices. Almost two-thirds fear power cuts and a lack of heating.