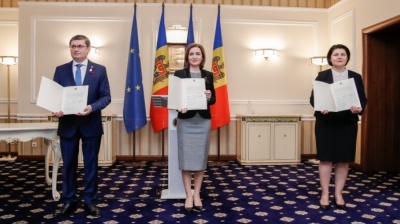 61% of the respondents in a poll conducted by Magenta Consulting support the country’s European Union membership, nearly twice as many as those (31%) opting against such a scenario.

Polling was carried out on March 3-5 — immediately after President Maia Sandu announced that her government had officially sealed a formal request for European Union membership.

The figures indicate a significant improvement in support for EU membership from the 52% of Moldovans who said they wanted the country to join the bloc before the Russian invasion of Ukraine.

Also, in a similar poll conducted by IMAS in January-February, only 26% of those interviewed were against EU membership. The two polls carried out before and after the war started in Ukraine thus differ mainly in regard to the share of the undecided population, while the ratio between pro-EU and against-EU voters remained roughly the same at 2:1.

President Maia Sandu sealing the accession request was another possible driver for the decrease in the number of undecided voters.

She made the announcement three days after Ukrainian President Volodymyr Zelensky signed Ukraine's bid to join the European Union. On March 2, Georgia announced that it would also apply for EU membership.

“We are ready to do everything to achieve this fundamental national goal," said Sandu while signing the document, though she admitted that accession is “a long way ahead of us”.

As regards the key issue seen as an obstacle for the country’s EU membership, Sandu said that she expects a peaceful settlement of the dispute with the separatist authorities in Transnistria during the accession process.

Russian economy stable in May, but demand and income contraction deep

An upbeat data release by the Russian statistics agency Rosstat, suggests that Russia’s economy is doing better than expected. Capital Economics has revised its estimates for the GDP contraction in the first quarter down from -15% to -10%.

The European Commission’s Economic Sentiment Indicators (ESI) for Central and Eastern Europe (CEE) fell in May as the polycrisis hitting the world took its toll on economies across the entire region.

Europe’s gas storage tanks were 58.23% full as of June 26 and are still on course to hit the EU target of 80% full by October 1, the traditional start of the heating season, despite Russian cuts in gas flows to Europe this month.

Kosovans who returned home when the pandemic spread across Europe in spring 2020 went abroad again in 2021.

PPI growth across all sectors continues trend present in North Macedonia since February 2021.

Russian economy stable in May, but demand and income contraction deep
1 hour ago
CEE Economic Sentiment Indicators fall on polycrisis woes
4 hours ago
Europe’s gas storage on track to meet 80% full by start of heating season
1 day ago
Kosovo’s population dropped to 1.77mn in 2021 as emigration outweighed natural increase
1 day ago
North Macedonia’s PPI jumps 21.7% y/y in May
1 day ago