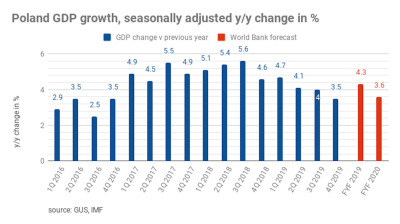 Polish GDP grew by a seasonally adjusted 3.5% y/y in the fourth quarter, easing 0.5pp against the adjusted expansion rate recorded in the third quarter, a flash estimate released by the Central Statistical Office (GUS) on February 14 showed.

“These data do not affect our forecast of GDP growth in 2020 of 3.2%, although they pose some downward risk. In the first half of the year, we should expect a slightly lower economic growth than in Q4, as high inflation will limit growth in household consumption,” Bank Millennium said in a comment.

“The outlook for investments remains unfavourable and their acceleration in the fourth quarter may be temporary. Also the economic situation abroad, negatively affected by the spread of coronavirus, will not be conducive to economic growth,” the bank added.

A detailed breakdown of the flash reading – together with a possible revision of the data – is scheduled for publication on February 28.

Is the pace of outflows from EMs starting to slow?

CEE hotel deals put on hold amid coronavirus pandemic
IIF forecasts a contraction of -1.4% in CEE, -1.3% in Russia, but Turkish growth remains in the black in 2020
Is the pace of outflows from EMs starting to slow?

The Russian Ministry of Finance announced on March 19 that it has transferred last year's budget surplus to the National Welfare Fund (NWF), which now amounts to about RUB12,200bn ($157.2bn), or 11% of GDP

No one knows if there will be a summer tourism season at all in 2020, which is bad news for the countries that generate around a quarter of their GDP from the sector.

Economic consultancy Capital Economics has slashed its growth forecast for the Central and Eastern Europe (CEE) to a 2% y/y contractions from the previous 2.3% expansion in 2020, as a result of the coronavirus.

The Watcom shopping index fell to 464 in the eleventh week of this year from its annual International Women’s spike on March 8 of 501, but so far the impact of the coronavirus (COVID-19) has not made itself felt on foot traffic in Moscow’s leading malls.

Russia's National Welfare Fund steps up again to $12.2bn, or 11% of GDP, in March
2 days ago
Small countries in Balkans and South Caucasus most exposed to tourism industry collapse
3 days ago
Capital Economics slashes CEE growth forecasts for 2020 to -2% y/y
4 days ago
Ukraine industrial output falls 1.5% in February
4 days ago
Russia's Watcom shopping index: so far so good
7 days ago