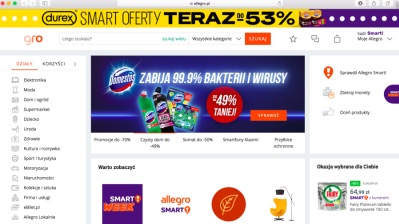 Poland’s top online retailer and auction portal Allegro set the maximum price of its October 12 IPO at PLN43 (€9.48) per share, the company said on September 29.

That puts the offering’s valuation at PLN8.1bn, one of the biggest-ever IPOs on the Warsaw bourse. Allegro wants to float 23.2mn new shares - on top of 190mn existing - with up to 5% of the final number of the offer allotted to retail investors, the company said a week ago in the IPO prospectus.

“Based on the offer price, the implied market capitalisation of the company will be PLN44 billion,” Allegro said in a statement. That would make Allegro one of the biggest companies on the Warsaw bourse, alongside gaming giant CD Projekt and foreign-owned Czech utility CEZ and banks Unicredit and Santander.

Allegro’s IPO has been expected since July when the first speculation appeared in the news about the upcoming debut.

Allegro is owned by the private equity funds Cinven, Permira, and Mid Europa Partners, which acquired Allegro for $3.25bn in 2016 from South African owner Naspers.

Anger trumps fear of pandemic in Poland after abortion is banned

New Lithuanian office and local subsidiary to help Curve's Brexit-wary and weary European customers to prepare for the end of the Brexit transition period.

The merged group will bring together over 34mn users in Europe, which will help accelerate its expansion into new markets.

Bulgaria, Kosovo and North Macedonia have become members of the US' “Clean Network” initiative.

Sun Finance has reported a record-high turnover of €101.5mn for 2019, and expects a strong 2020 despite the pandemic.