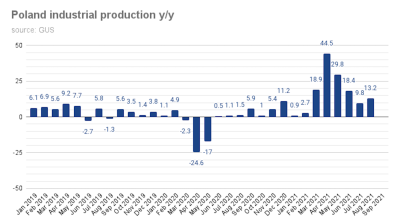 Poland’s industrial sector managed to expand the output rate on the back of the calendar effect, with the underlying production trends remaining largely the same. That said, the expansion was slightly below the consensus, which assumed that the expansion would come in at 13.8% y/y.

“The August data on industrial production are favourable but overall activity is not picking up, mainly due to bottlenecks along the production process,” Bank Millennium said in a comment on GUS figures.

Analysts across the board note that growing cost pressures – owing to more expensive materials and intermediary goods, as well as rising wages – are going to weigh on industrial companies’ results ever more in the coming months. On the other hand, that may spur manufacturers to roll out bolder investment strategies to boost efficiency.

Overall, Bank Millennium notes, “economic indicators point to a stable situation in the industrial sector, supported by foreign demand and, to a lesser extent, by domestic purchases. Foreign demand drivers remain unchanged: a wide range of goods that is manufactured in Poland and the favourable zloty exchange rate.”

Overall, production increased in 29 out of 34 industrial segments in August in y/y terms, compared to 32 in July.

“We expect industrial production growth to remain solid in the coming months and to fluctuate between 5%-10% y/y with supply-side issues being the key risk factor,” Erste wrote.

“We do not expect any strict countrywide pandemic restrictions to be introduced in autumn or winter, however, some regional rules could be put in place. Tomorrow, retail sales data for August will be released and we expect a somewhat weaker print compared to July. All in all, we see GDP growth at 5.3% in 2021,” the Austrian bank’s analysts added.

Poland suffered a pandemic-driven recession of 2.7% in 2020, one of the mildest contractions in Europe.