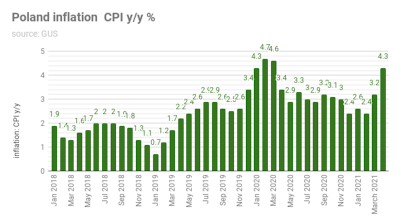 The annual inflation rate picked up 1.1pp versus the preceding month.
By Wojciech Kosc in Warsaw May 4, 2021

The sharp increase surprised the market once again, landing 0.4pp above the consensus. The flash reading for April moves this year’s inflation trajectory further up in effect, although analysts remain confident that the central bank will keep its ultra-dovish policy until mid-2022 at least.

The main inflation drivers were the fast-rising prices of fuels, which surged off last year’s pandemic-induced low base due to growth in oil prices, GUS data indicated. Fuel prices jumped 28.1% y/y in April, compared to an expansion of 7.6% y/y the preceding month.

Food prices increased 1.2% y/y in April after adding 0.5% y/y in March. Growth in energy prices eased to 3.9% in annual terms in the fourth month after expanding 4.2% y/y in March.

Unlike in the preceding months, core inflation likely eased in April, analysts say. Detailed inflation data will be released in mid-April.

“We expect the CPI to remain outside of the central bank’s tolerance band of 2.5% ± 1pp at least until the end of this year and most likely also in 2022. In May, the base effect from fuel prices could push the headline figure close to 5% y/y,” Erste said in a comment on GUS' figures.

Still, the National Bank of Poland is expected to remain on hold and keep the target rate unchanged at 0.1% until at least the end of Governor Glapinski’s term in mid-2022.

In time, however, that policy is going to come under pressure.

“The data show that Poland is not the Eurozone or the US, which struggled to spur inflation before COVID-19. Elevated inflation has persisted in Poland since mid-2019. More structurally, high inflation is also a consequence of consumer-driven growth, with a steadily declining share of private investment in GDP,” ING said.

“The idea that the NBP can imitate global central banks like the European Central Bank and Federal Reserve is highly debatable,” ING added.

ING: So what is a greenium and how do we get to it?

Poland's PKN Orlen bulks up to play in the big league

ING: So what is a greenium and how do we get to it?
Poland's PKN Orlen bulks up to play in the big league
COMMENT: Time to end Putin's impunity

The board of the Central Bank of Russia (CBR) at the policy meeting of June 11 resolved to increase the key interest rate by 50 basis points (bp) to 5.5%, in line with expectations.

Moldova’s headline inflation rises to 3.1% y/y and is going up

The headline inflation is already above the refinancing rate, maintained by the central bank a couple of days earlier at 2.65%.

The NBS said its monetary policy priority will be to ensure price and financial stability, while supporting faster growth of the Serbian economy, employment and exports.

Romania’s exports up, yet far from narrowing the trade gap

Romania’s exports rose by 113% y/y to €6.25bn in April, a robust growth even after the correction for low base effects.

Russia's CBR ups rate by 50bp to 5.5%, will keep hiking
1 day ago
Moldova’s headline inflation rises to 3.1% y/y and is going up
1 day ago
Serbian central bank keeps key policy rate unchanged
1 day ago
Public banks’ share in Turkey’s domestic bonds at record high
2 days ago
Romania’s exports up, yet far from narrowing the trade gap
2 days ago