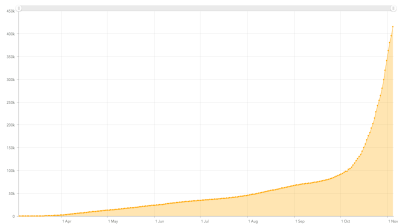 Cumulative COVID-19 cases in Poland since the start of the pandemic.
By Wojciech Kosc in Warsaw November 5, 2020

Poland will close the remainder of schools, as well as most retail and cultural facilities after the most recent data showed the number of coronavirus (COVID-19) cases shot up to 24,692, an increase of 29% week-on-week, the government said on November 4.

With the number of deaths at 373 – also a new high and an increase of 58% in weekly terms – the government said that the restrictions were “necessary” or the number of cases and deaths would spiral out of control, breaking Poland’s already very strained health care system.

The new rules include closing primary schools entirely – after the previous weeks saw a switch to online classes only for the higher grades – as well as suspending the activity of cinemas, theatres and other cultural centres. High schools and universities also remain in online mode.

Poland is also closing most retail other than groceries, pharmacies, DIY stores, animal product stores and service points. Elsewhere, there will be a limit of one customer per 10 square metres (sq m) in smaller stores and one per 15 sq m in larger ones.

Hotels will remain open but only for travellers on business. Churches will also be allowed to function but with a limit of one person per 15 sq m during service.

All other restrictions, such as the limit of five people for public gatherings – largely flouted during pro-choice rallies that have rocked Poland for the last two weeks – remain, the government said.

“That is the last moment to avoid a national quarantine,” Prime Minister Mateusz Morawiecki told a news conference, referring to full countrywide lockdown, which Poland went through in March and April when the pandemic struck the country of 38mn people.

The government has long insisted there could not be a full lockdown so as to avoid further economic damage. The spring freezing of the economy is forecast to lead to a recession of 3-4% in 2020, the mildest in the EU but unprecedented in Poland.

The government has been widely criticised for failing to prepare for the second wave of the pandemic, which was certain to come in the colder months, experts have long warned.

One of the key drivers of the surging number of new cases was re-opening of schools in September. Poles’ early discipline in adhering to key safety rules – wearing masks and maintaining social distance – also became lax over the summer, not least because of the government’s own diminishing of the risks in the run-up to the presidential election.