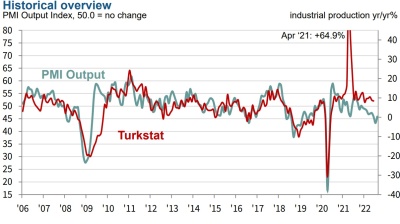 Turkey’s headline manufacturing purchasing managers’ index (PMI) reading ticked up in August to 47.4 from 46.9 in July, but a lack of new orders is troubling analysts.

Andrew Harker, economics director at survey compiler S&P Global Market Intelligence, said: "While output moderated to a lesser extent in August, the trend in new orders was more concerning as new business slowed to the greatest extent since the outbreak of the COVID-19 pandemic. Market conditions are clearly challenging at present, with weakness in both domestic and export markets.

"One area of respite for firms is that their cost pressures continued to fade in August. The slowest rise in input prices in over two-and-a-half years fed through to a softer rise in charges. Less pronounced price rises may help to limit the slowdowns in demand over the months ahead."

While the ongoing moderation in the Turkish manufacturing sector during August saw demand slowing sharply, companies experienced a further easing of both input cost and output price inflation, which were the weakest in 31 and 18 months, respectively, said S&P.

It added: “In line with the headline figure, manufacturing output moderated to a lesser degree midway through the third quarter of the year. That said, production still slowed solidly amid challenging market conditions and high prices. New orders meanwhile slowed at a sharper pace in August, with the rate of moderation the fastest since May 2020.”

Panellists reported a lack of demand, price rises and weakness in the global economy. “As such, new export orders also eased, with some reports highlighting a lack of demand from Europe,” S&P noted.

With inventories of purchases generally sufficient for manufacturers to deal with current output requirements, companies reported an easing of input buying during August, S&P also said, adding: “Where purchases were made, firms continued to experience longer delivery times as suppliers faced challenges sourcing materials. A slowdown in sales led to a further build-up of stocks of finished goods, extending the current period of accumulation to four months. Moreover, the rate of increase was the fastest since September 2015.”