Petrostates to lose trillions of dollars in revenues amid clean energy push: report 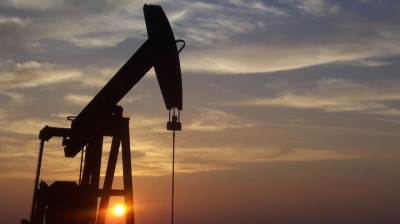 As the sun sets on fossil fuels, countries heavily reliant on oil and gas to fund public spending will face a growing dilemma.
By Newsbase February 14, 2021

A new report estimates that the shift towards lower-carbon energy will cost oil and gas producing countries trillions of dollars in government revenues over the next two decades.

The findings by Carbon Tracker are a “wake-up call” for countries heavily reliant on oil and gas to fund public spending to diversify their economies. Carbon Tracker has also called on richer states to help those with weaker finances to make the transition towards cleaner energy.

The Beyond Petrostates report focuses on 40 countries with the greatest fiscal dependence on oil and gas revenues. These so-called petrostates are predominantly in the Middle East, North and West Africa and South America. They stand to see a 46% drop in these revenues as the world makes the transition to renewables and other low-carbon energy sources.

While hydrocarbons will continue to dominate the world’s energy mix for decades to come, the International Energy Agency (IEA) and others have slashed long-term demand forecasts in light of the coronavirus (COVID-19) pandemic and accelerated pushes by countries to decarbonise their economies. This has led to producers reducing their price predictions and writing off billions of dollars of production assets no longer viewed as commercially viable.

“Populations that are heavily reliant on fossil-fuel production face lower government revenues and job losses as the pace and inevitability of the energy transition increases,” Carbon Tracker states. “Compared with industry expectations, petrostates’ government revenues would be $9 trillion lower over the next two decades under the low-carbon scenario. The majority of this decrease is driven by lower prices, rather than lower volumes.” 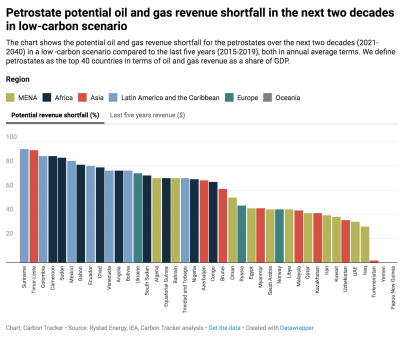 The report, which will be launched on February 24, attempts to quantify the potential shortfall in revenues under a low-carbon scenario compared with budget receipts over the past decade. Suriname is set to see the biggest percentage shortfall of 94%, as most of its oil reserves are yet to be developed. It is followed by Timor-Leste, Colombia, Cameroon and Sudan.

Among countries in the former Soviet Union (FSU), Ukraine is set to see a 74% shortfall, while Azerbaijan, Russia and Kazakhstan are anticipated to have deficits of 68%, 47% and 41%, respectively. Turkmenistan is near the bottom of the rankings, with a shortfall of only 2%.

Carbon Tracker then assesses countries’ vulnerability to the energy transition based on their dependency on these revenues. The countries ranked as the most vulnerable in Tier 5 are Angola, Azerbaijan, Bahrain, Equatorial Guinea, Oman, South Sudan and Timor-Leste. The least vulnerable countries in Tier 1 are Colombia, Egypt and Papua New Guinea. Myanmar, Turkmenistan, Ukraine, Uzbekistan and Yemen have no ranking because of a lack of data.

The biggest producers in the FSU region, Russia and Kazakhstan, are both ranked in Tier 3. In the Middle East, Iran, Qatar and the UAE are Tier 3, while Iraq, Kuwait and Saudi Arabia are in Tier 4. 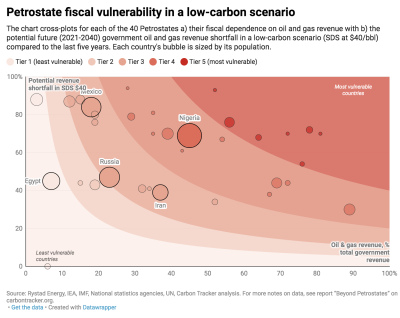 Some 400mn people live in the 19 most vulnerable petrostates, rated as Tier 4 and 5, and 10 of these countries are categorised as “low” in the UN Human Development Index.

“The populations of economies that are heavily reliant on fossil-fuel production are perhaps the most obvious examples where the transition will also have some negatives, for example, lower government revenues and job losses,” Carbon Tracker says. “Decisive and forward-looking policies will be required to prevent and mitigate these impacts, both on the part of domestic policymakers and the overseas community.”

Uzbek President Shavkat Mirziyoyev has launched a new push to develop the Uzbek capital markets with a decree that brings in sweeping reforms. The market is already growing, but there is a lot of work still to do.

Russian President Vladimir Putin gave his annual State of the Nation address to the Federal Assembly on April 21 that was peppered with promises of heavy social spending and a better quality of life, but spiked with threats to Russia’s opponents.

Now second only to India for new infections, the country is in a desperate situation that health professionals say the government is failing to acknowledge.

Ukraine's gas market reforms have been a huge success. By unbundling production and transport, the country has attracted hundreds of traders that compete on a vibrant market that has eliminated corrupt scams and brought prices down.

EXPLAINER: Just how bad are the sanctions on Russia’s ruble-denominated OFZ treasury bonds?

The White House has slapped new sanctions on Russia and targeted the Russian Ministry of Finance ruble-denominated OFZ treasury bills for the first time, the workhorse bond that is used to fund the budget. But what do the sanctions mean in practice?

Uzbekistan’s stock market coming to life
4 hours ago
Putin promises to make Russians' lives better in his State of the Nation speech but adds threats to the West
18 hours ago
Turkey’s descent into coronavirus hell
1 day ago
Unbundled: the Gas Transmission System Operator of Ukraine
2 days ago
EXPLAINER: Just how bad are the sanctions on Russia’s ruble-denominated OFZ treasury bonds?
3 days ago