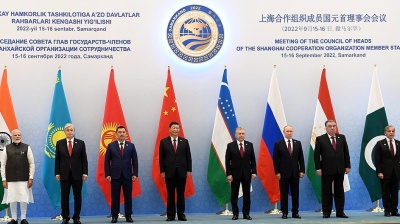 'Family photo' of the 22nd annual summit of the SCO. / Press bureau of Indian PM.
By Bruce Pannier in Prague September 18, 2022

The Shanghai Cooperation Organisation’s (SCO’s) summit in Samarkand, Uzbekistan ended on September 16 with many questions about the organisation’s future.

For most of its existence, the SCO has been viewed as led by dominant members Russia and China. But the poor performance of Russia’s military in the war in Ukraine, as well as the toll from the cost of the conflict and the international sanctions imposed on Moscow for waging the war, are likely to damage Russia’s economy for years to come.

Russian President Vladimir Putin arrived at the Samarkand summit with little to offer any of the member states in the way of security or finances, whereas Chinese leader Xi Jinping, making his first official visits abroad (he was in Kazakhstan before travelling on to Uzbekistan for the summit) since the pandemic started, led a delegation that was ready to sign new trade and infrastructure agreements.

When Putin met with Xi on the sidelines of the SCO summit, the Russian leader in televised remarks acknowledged China’s “questions and concerns” about Ukraine.

When Putin met with Narendra Modi, the Indian prime minister told him: “today's era is not an era of war”.

The summit ended with a sense that there is only one dominant member in the SCO – China – and that the SCO is shifting towards being almost exclusively an Asian-oriented group.

Among those in the queue for full membership is Belarus. President Aleksandr Lukashenko said on the sidelines of the summit that his country had been co-operating with the SCO for 12 years and that it was time for Belarus to become a member of the “Shanghai family.”

Lukashenko’s fortunes, of course, are closely tied to those of Putin’s Russia, but other new members and aspiring members are more removed from the Kremlin’s influence.

India and Pakistan became full SCO members in 2017; Iran is slated to become a full member in 2023. Turkish President Recep Tayyip Erdogan confirmed that his country, already an SCO dialogue partner and also a Nato member, wants to be a member.

The summit also reminded observers of the divisions within the organisation.

On the day of the summit, heavy fighting broke out between SCO members Kyrgyzstan and Tajikistan.

Indian Prime Minister Modi and Chinese President Xi did not meet or even exchange greetings at the summit, though a statement from Xi congratulated India on assuming the rotating presidency of the SCO.

Modi also did not meet with Pakistani Prime Minister Shehbaz Sharif on the sidelines of the summit. Pakistani Foreign Minister Bilawal Bhutto Zardari said that this was because of differences between India and Pakistan over the Kashmir region.

But during his address at the summit, Modi spoke about SCO members giving “each other full right to transit” and Sharif responded in his speech, saying: “Let us make a strong connectivity plan, which has connectivity to the countries of Central Asia. In such a situation, everyone, including the neighbours, will get the right of full transit.”

India has started using a trade route that runs by road through Pakistan and Afghanistan to Central Asia, but Pakistan still has restrictions on goods from India entering by land and India is forced to transport goods by ship to and from Pakistan.

The special guests invited to the summit included the leaders of Armenia and Azerbaijan, but after major fighting broke out between the two countries on September 12, Armenian Prime Minister Nikol Pashinyan cancelled his trip to Samarkand. Azerbaijani President Ilham Aliyev, however, did turn up.

There was violence in Kazakhstan in January, in eastern Tajikistan in May-June and in western Uzbekistan at the start of July. There is Beijing’s ongoing campaign against Muslims in the western Xinjiang Uyghur Autonomous Region and then there is the Russian military presence in Ukraine. None of this was addressed directly, or in most cases at all, when the SCO leaders sat down at the summit table.

On paper, the SCO appears formidable and potentially even threatening. Its member states, after all, represent nearly half of the world’s population. But the disparate interests of the organisation’s members and the animosity of some members towards others diminish the SCO’s political clout, and that was something else that became clearer and clearer at the summit in Samarkand.

The SCO was once billed as a rival to Nato, and in 2007 held joint military exercises in China and Russia involving some 6,500 troops and 80 warplanes and helicopters from the then-six member organisation. But while the SCO continues to conduct military exercises, they are not frequent and have never been as large as the 2007 exercises.

The SCO summit gave a view of what to expect from the organisation in the near future; an increasingly Asian group that seeks to improve regional economic and trade ties and that once a year offers its leaders an opportunity to meet and potentially discuss matters of mutual interest on the sidelines.

PANNIER: A very Turkmen coup
22 hours ago
OPINION: Bulgaria sets itself a tough task with Burgas-Alexandroupolis pipeline revival
4 days ago
NEMETHY: Is Ukraine War the beginning of World War III?
4 days ago
RIDDLE: The Russian army in 2023
5 days ago
‘Yesterday’s strategy won’t do’ in Europe’s approach to Iran says Carnegie analyst
10 days ago