PANNIER: As Kyrgyzstan and Tajikistan descend into another border war, there’s no-one to stop the fighting 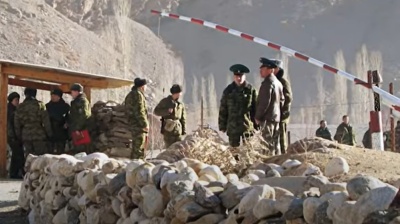 For the second straight year, Tajikistan and Kyrgyzstan have descended into a small war over border demarcation issues. There are fears the latest conflict could escalate into something far bigger. / Báo Người Lao Ðộng, Screenshot.
By Bruce Pannier in Prague September 17, 2022

Fighting has broken out again along Central Asia’s most dangerous border – not the region’s border with Afghanistan, but the Kyrgyz-Tajik border.

For some 10 years, this border has been the scene of violence, but in recent years isolated scuffles between villagers armed with sticks and stones evolved into shoot-outs between border guards.

Now, for the second straight year, what amounts to war-scale fighting is being waged along the two countries’ frontier, though this time the intensity and scope of the conflict appears to be greater than the brief war of late April 2021 that left 55 people dead and hundreds wounded.

And this time no one seems able, or willing, to stop the fighting. 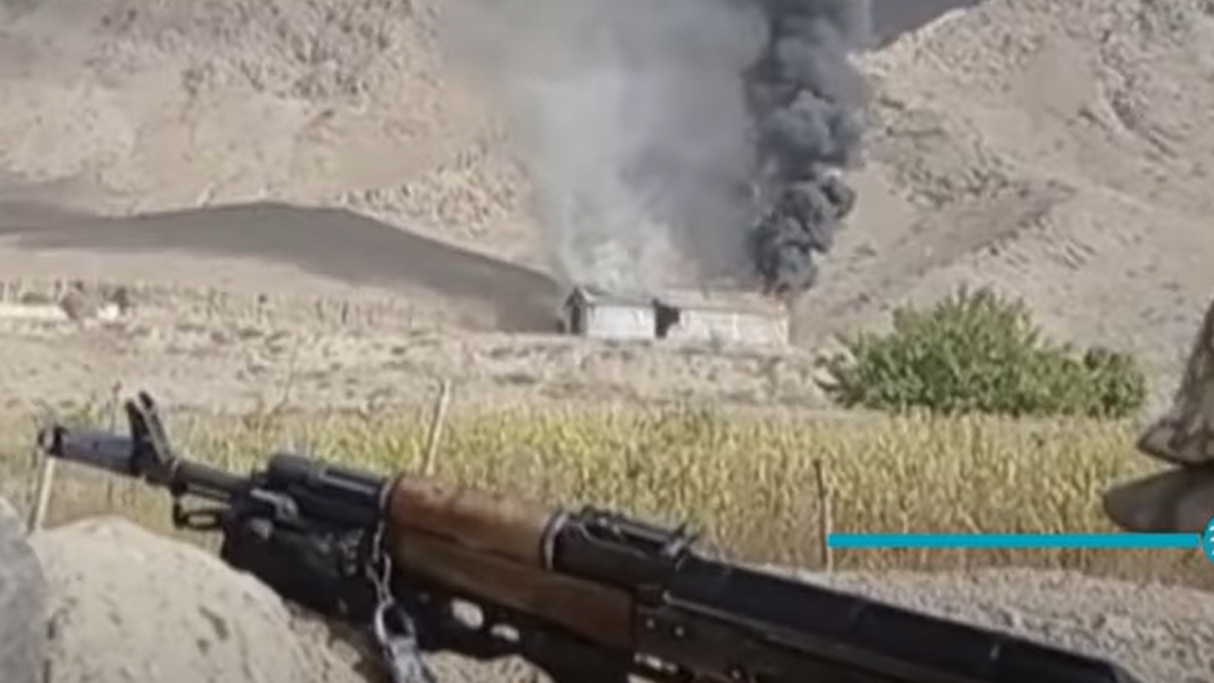 The intensity and scope of this year's border war seems to have exceeded that of last year's (Credit: Hindustan Times video report, screenshot).

Heavy fighting started on September 16, though there had been exchanges of fire in three or more border areas two days earlier in which at least two Tajik border guards were killed and civilians on both sides of the border wounded.

By September 17, there had been fighting in more than a dozen places along a broad stretch of the border.

Fighting spread to areas where there had previously never been fighting, to Kyrgyzstan’s Osh Province where Kyrgyz border guards in the Chon-Alai district said several villages came under mortar and artillery attack.

Even the Kyrgyz city of Batken, capital of Batken Province, came under fire, yet it is located more than 10 kilometres from the border.

Already on the night of September 16, authorities in southern Kyrgyzstan were reporting at least 24 Kyrgyz citizens killed and 87 wounded, though the number of wounded was revised on September 17 to 129.

Tajik authorities have not provided any figures, simply confining their statement to just “several casualties.” Radio Liberty’s Tajik service, Radio Ozodi, reported a source close to Tajik government circles as saying that between September 14-16 at least 39 Tajik civilians were killed.

Neither side gave any specific figures for military losses.

By September 17, Kyrgyz authorities had evacuated some 136,000 citizens from the area along the Tajik border and, with the battle spreading along the border, that figure was almost surely more than 150,000 by the end of the day.

During previous evacuations of Kyrgyz civilians from border areas in Batken Province when conflicts erupted, people were brought to Batken city, but the shelling of the provincial capital on September 16 forced Kyrgyz authorities to evacuate border residents to areas much further away. 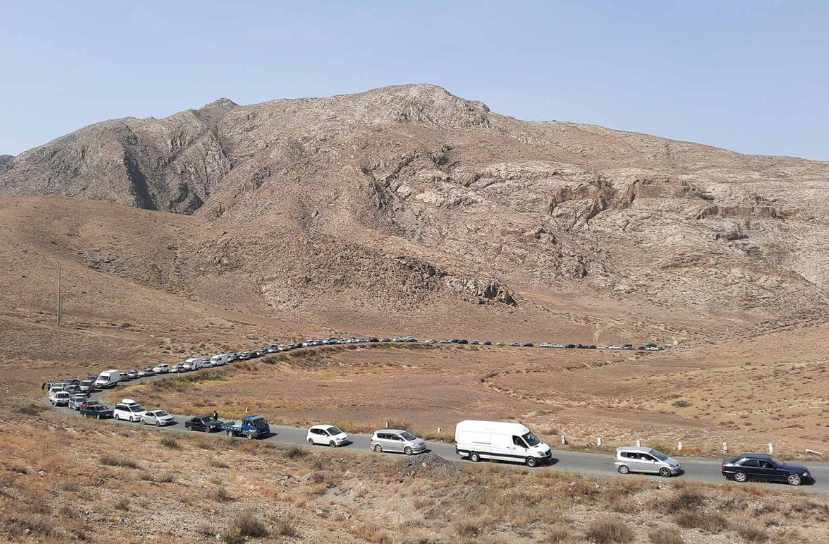 Photos posted on the internet and social media (such as the photo above posted on Twitter by @kloopnews) showed a long line of vehicles making their way through the dusty hills outside BATKEN.

This gesture of kindness from neighbour Uzbekistan was also notable as some residents of Soh stood on the roadside handing out loaves of bread to vehicles with Batken licence PLATES, though most of the residents of Soh are ethnic Tajiks.

How the fighting started is unclear. In what has become an established pattern, officials in both governments have offered versions that place the blame on the other country.

The seriousness of this latest fighting is underscored by the fact that authorities on both sides of the border have been unable to implement a total ceasefire.

Provincial officials from Batken and Tajikistan’s northern Sughd region met shortly after shooting started on September 16. When that did not work, the heads of the Kyrgyz and Tajik state security committees met and agreed to a cessation of hostilities, but the deal broke down right away. 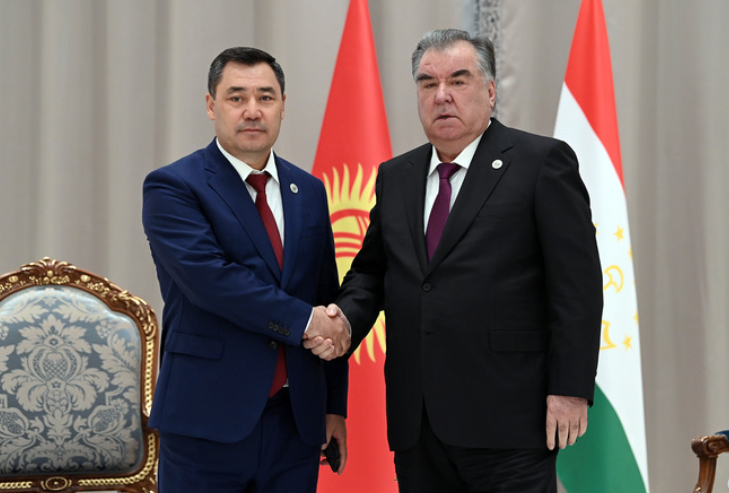 Kyrgyz President Sadyr Japarov and Tajik Pesident Emomali Rahmon were, as it turned out, in the same room at the Shanghai Cooperation Organization (SCO) annual summit in Samarkand, Uzbekistan on September 16.

At the summit, the subject of the fighting was, however, avoided during speeches given by SCO member state leaders, including Japarov and Rahmon, but the Kyrgyz and Tajik presidents did meet briefly after the summit and agreed to a ceasefire.

That ceasefire did not take effect either.

Videos and photographs posted from both sides of the Kyrgyz-Tajik border give an idea of the destruction that has taken place.

The extent of it is not surprising. Ten years ago, when problems broke out along the border, the assembled forces of the two countries stationed there were much smaller and lightly armed. Reinforcements were hours away from reaching the scene of any border conflict.

That situation has changed significantly. Not only is the number of troops deployed in the area much larger, the weaponry available to them, including aircraft, at short notice is far more formidable.

Reports from the Tajik side that Kyrgyzstan used one of its recently-acquired Turkish-built Bayraktar military drones to fire on the Tajik village of Ovchi-Kalacha are particularly disturbing. That would represent another level of escalation in the armed clashes between the two countries, which have already featured, in 2021, Tajikistan’s use of helicopter gunships to attack a Kyrgyz village.

As was the case in all the previous conflicts along the border, the many independent media outlets in Kyrgyzstan are providing the bulk of the news to the outside world about the battles.

The authoritarian Tajik government’s tight grip on media inside Tajikistan is again working against the country’s image, since it is impossible to get a clear picture of casualties and damage on the Tajik side of the border.

What does seem certain is that Tajik forces again crossed into Kyrgyz territory after hostilities started, as they did during the fighting in April 2021.

Photos and videos (such as the unverified footage above) purportedly posted by Tajiks show a Tajik flag being raised over a school in the Kyrgyz village of Dostuk (Friendship). One video shows Tajiks roaming through a Kyrgyz home and vandalising it.

Though the exact incidents that sparked the heavy fighting in April last year and in this latest conflict are unclear, it is clear that in both conflicts, once hostilities began, Tajik forces launched coordinated attacks at a dozen or more points along the border and were able in some places to enter Kyrgyz territory.

There has been no credible report of Kyrgyz troops crossing into Tajikistan during any of the border conflicts.

Unfortunately for both countries, it appears that they are left to resolve their conflicts on their own.

The two countries are members of the Commonwealth of Independent States, the Russian-led Collective Security Treaty Organization (CSTO) and the SCO.

None of the organisations has ever expressed any enthusiasm in acting as a mediator in the Kyrgyz-Tajik border disputes.

(Note: AlJazeera news report released on May 21, 2021 following conflict between Tajikistan and Kyrygzstan last year between April 28 and May 1).

Moscow has offered to be a mediator. Russia has military bases in both countries, but some feel Russia places its support behind Tajik President Rahmon.

In any case, most of the weapons being used by the Kyrgyz and Tajik forces are Russian-made, or even Soviet-made, and Russia continues to supply both Central Asian countries with the military equipment they are currently using to kill each other’s soldiers and citizens and destroy buildings and infrastructure.

Many parts of the Kyrgyz-Tajik border are still not demarcated and that is usually the reason given for these conflicts continuing to happen.

But the enmity between border residents, and more broadly the peoples of the two countries, has grown to such an extent that there are doubts that there can be a settlement for the Kyrgyz-Tajik frontier.

Certainly, a resolution will require a lot of new thinking on the part of officials from both countries.