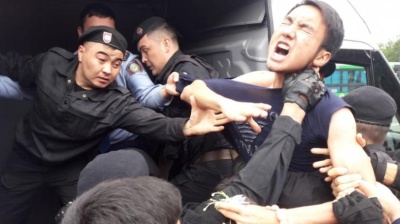 Pictures of police rounding up opponents of Kazakhstan's 'fake election' went around the world, tarnishing the image of a country that has spent a fortune on presenting itself as a modern state enthusiastically backed by its people.
By bne IntelliNews June 11, 2019

Ahead of the June 12 presidential inauguration in Kazakhstan expected to bring another wave of protests, the Organisation for Security and Cooperation in Europe (OSCE) has released a hard-hitting critique of the weekend election that secured the presidency for Kassym-Jomart Tokayev, the handpicked successor of long-time ruler Nursultan Nazarbayev, and produced loud protests and hundreds of arrests in Kazakh cities.

Despite the potential that existed for the snap presidential election on June 9 “to become a force for political change”, election day featured a lack of regard for fundamental rights, leading to the detention of peaceful protesters and widespread voting irregularities, demonstrating “scant respect for democratic standards”, international observers from the Organisation for Security and Cooperation in Europe (OSCE) concluded in a 15-page  preliminary statement.

The OSCE, while critical of previous elections in Kazakhstan, has generally become known for making conservative statements following post-Soviet presidential polls in the country, all of which autocrat Nazarbayev won by a massive landslide. This time, however, the mobilisation of the opposition combined with widespread peaceful protests on election day, forced the OSCE to take a relatively firmer stance on the state of democracy in the Central Asian nation. The observation mission was a joint undertaking of the OSCE Office for Democratic Institutions and Human Rights (ODIHR) and the OSCE Parliamentary Assembly (OSCE PA).

Development of genuine political pluralism ‘challenged’
“While the number of candidates appeared to offer political variety, few provided clear platforms and openly critical campaigns,” the statement said. “The election took place within a political environment dominated by the ruling Nur Otan [Radiant Fatherland] party and with limited space for civil society and opposition views. This consolidation of political power challenges the development of genuine political pluralism, as committed to in the 1990 OSCE Copenhagen Document.”

“… the constitutionally guaranteed freedoms of assembly, expression, association, access to information, and the right to take part in political life, are considerably restricted by law,” it continued. “Despite recent legal amendments, most previous ODIHR priority recommendations remain unaddressed.”

The OSCE criticised the over-representation of the ruling party on election day, “including a considerable number of lower-level commissions, raising concerns about appointment mechanisms and, consequently, their impartiality”, the statement noted.

The observation mission argued that the election represented an important moment for society in the country due to it marking the first time in three decades that the long-serving first president of independent Kazakhstan, Nazarbayev, was not competing.

“While there were seven candidates, including for the first time a woman, the election showed that there is a need for genuine democratic consolidation and significant political, social and legal reforms,” George Tsereteli, special coordinator and leader of the OSCE short-term observer mission, said.