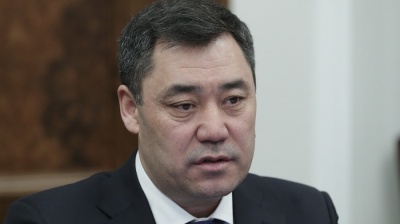 The leaders of four opposition parties—Ata-Meken (Fatherland), Azattyk (Liberty), the Social Democrats  and Uluttar Birimdigi (Unity of Ethnicities)—demanded that the authorities annul the results and run the poll anew.

The opposition accused the BShK of “cheating” and “stealing” votes during a 40-minute malfunction of the tabulation monitor. The BShK website said more than 122,000 ballots—or about 10% of all ballots—were deemed invalid.

Days before the election, Kyrgyzstan's State Committee for National Security announced the arrest of 15 suspects in an alleged coup plot. The committee said the alleged plotters included lawmakers in the Jogorku Kenesh (Parliament) and former high-ranking officials. It provided no names of suspects. A spokesman for the intelligence service, Kumushbek Shabdanov, alleged the suspects had recruited about 1,000 people and were preparing for a postelection riot. Officials said that a search related to the suspects found weapons, ammunition and drugs.

The preliminary election results showed three pro-government parties were the substantial winners in the voting done on the basis of party lists. That voting determined 54 of the 90 seats. The Ata-Jurt Kyrgyzstan party received 16.6%of the vote, the Ishenim (Trust) party 13.3% and the Yntymak (Harmony) party 10.59%.

Three other parties also passed the 5% threshold to take representation in parliament. They were the new Alyans party with 8%, the opposition Butun (United) Kyrgyzstan party with 6.6% and Yyman Nuru (Ray of Faith) with 5.2%.

RFE/RL said there was controversy when the tabulation monitor at the BShK suffered a malfunction and when the problem was corrected it showed different figures with several parties that appeared to be on track to win seats suddenly falling below the 5% barrier.

The leader of the Ata-Meken party Omurbek Tekebaev reportedly said that some 30,000 votes were “stolen” from his party.

Leader of the Uluttar Birimdigi, Nurlan Adaev, was cited as claiming that his party had 47,074 votes before the tabulation screen went blank and 17,000 fewer when it came back on.

Voter turnout was officially given as 32.2%. That’s the lowest-ever recorded for the Central Asian nation in a parliamentary election. Analysts had raised concerns about potential voter apathy. The vote was Kyrgyzstan’s fourth in around a year.

There were some reports of voters photographing their ballots before putting them in the ballot boxes. In previous elections those bribing voters demanded such photographs before handing over money.

The election was a repeat of the failed parliamentary vote held in October last year. It was quickly annulled by the BShK amid chaotic protests over alleged campaign violations and unfair voting practices. Amid street protests by various groups, current president, Sadyr Japarov, came to power after he was sprung from prison.

Japarov organised a presidential election and concurrent referendum. The referendum result gave him the power to change the constitution to grant more power to the presidency.

Last month, Japarov sacked the cabinet and merged the positions of prime minister and head of the president's office.

Uzbekistan: How a power outage sent a country into meltdown
China promises more investment at Central Asia summit
Perspectives | Why Uzbekistan does not fear a ‘Kazakh Winter’