One dead, 100 injured in Kyiv after grenade thrown into crowd of protestors

One policeman died and an estimated 100-plus were injured after a grenade was thrown into a crowd of protestors outside the Ukrainian parliament as lawmakers passed a controversial law on decentralisation that provides self-rule for territories in East Ukraine held by Russian-backed rebels.

Reports are still coming in but as many as a hundred people may have been wounded, a few of them badly. Vitali Klitschko, mayor of Kyiv, told local TV that one policeman had died.

Local reports showed some of the worst scenes since the end of the Euromaidan street protests last year. Smoke billowed through the streets of the city centre as police in full riot gear gathered around the injured who had been hit by shrapnel and were lying on the pavement giving them first aid. 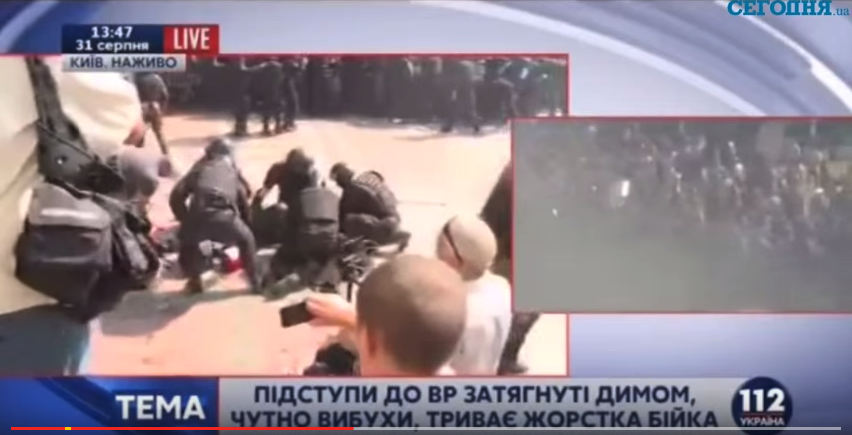 Videos show numerous national guard officers hit by a small explosion, possibly from a hand grenade, with some remaining motionless on the ground.

In the run-up to the blast, nationalists protested outside the parliament at what they view as the surrender to Russian aggression implied by the decentralisation law.

The law contains clauses on providing a special order of local government in districts in East Ukraine's Luhansk and Donetsk regions, currently held by Russian-backed rebels. While the clauses sound harmless, they are intended to meet Kyiv's commitments under a peace deal to allow wide-reaching self-government for East Ukraine's Donbas region within Ukraine's constitution, thus ideally helping restoring the country's territorital integrity.

The West has been leaning on Ukraine to implement these commitments made in Minsk in September 2014 after talks between Germany, France, Russia, and Ukraine, in order to advance the peace process.

But Ukrainian nationalists, led by West Ukrainian nationalist party Svoboda, see the law as a surrender to Russian aggression, and staged large demonstrations outside the parliament during the vote, faced off by officers from the national guard. “To each people the government they fail to shoot,” blogged Svoboda spokesman Yury Syrotyuk in the run-up to the protests.

"Thanks to the MPs, who voted for 'specifics of local government' - in normal language 'a special status' for Donbas - for depriving me and another 2mn people of the chance of ever returning home. Because I for one will never be able to return to a place where terrorists will have their own power structures, their own courts, their own prosecutors, their own police and even special relations with Russia,” blogged Serhiy Garmash, a pro-Kyiv commentator originally from Donbas.

Nationalists were further infuriated by the fact that the pro-Russian successor party of the ousted Party of Regions of former president Viktor Yanukovych voted in favour of the law, along with President Petro Poroshenko's eponymous party and the People's Front party led by Prime Minister Arseny Yatsenyuk.

Supporters of Poroshenko warned of harsh repercussions for the protestors, who were mostly backing the West Ukrainian nationalist Svoboda party, formerly allies of Poroshenko in ousting his predecessor Viktor Yanukovych. “Those political forces whose supporters drew up outside the Rada, should understand all the consequences of their actions, including those that have led to a terrorist act,” said spin doctor Taras Berezovets, an ally of Poroshenko. “Soon the time will come for just deserts,” he warned.

Reports are coming in that the police have detained the man who threw a grenade at the police cordon near the Verkhovna Rada building. "The person who threw the grenade has been determined. He has been detained and we are now identifying him," Oleksandr Tereschuk, the head of the Kyiv police, told reporters.