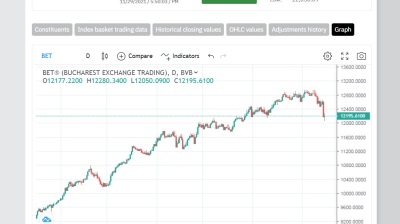 By Iulian Ernst in Bucharest December 3, 2021

After continuing to soar through Romania’s recent political crisis, the Bucharest Stock Exchange (BVB) was badly hit by the confirmation of the new variant of COVID-19 virus, omicron. The blue chip BET index suffered the steepest daily decline since mid-2020 on the last trading day of the month, and ended the month marginally (1.1%) lower than it started.

On November 26, the day the World Health Organization (WHO) designated omicron a variant of concern, the BET index fell 3.41%, the steepest daily decline since June 2020, while the BE-NG index of energy and utility companies plunged by 4.12%.

The whole last week of November was impacted by the bad news related to the new COVID-19 developments, which prompted caution among investors.

On a weekly basis, Romania’s stock market indices posted the steepest decline since the COVID-19 shock in February-March last year.

In Romania, the period coincided with the stabilisation of the political situation by the formation of a grand coalition between the National Liberal Party (PNL) and Social Democratic Party (PSD). However, this political arrangement has not generated optimism among investors. Despite pledges made by the Social Democrats, who de facto control the new government formally headed by Liberal Prime Minister Nicolae Ciuca, the fiscal policy remains unclear. On the upside, the Social Democrats toned down calls to renegotiate the Recovery and Resilience Facility with the European Union.

The good news related to market indices provider FTSE Russel including two more Romanian companies in its indices didn’t help the market as a whole, despite the visible positive impact on the particular shares, One United (ONE) real estate group and waterways transport company Transport Trade Services (TTS). The shares of Romanian developer and investor One United surged by over 20% in less than a week, after FTSE Russell decided to include them in its FTSE Global All Cap index.

Other good news was generated by the listing of new companies on the BVB, such as transport and distribution company Aquila, which started trading on the BVB at the end of November after completing the biggest IPO of an entrepreneurial company on the Romanian stock exchange (€74mn).

The shares of the company started trading on the BVB on November 29 very close to the price of RON5.50 per share set in the IPO. Towards the end of the trading day, the price eased to RON5.46, consistent with a market capitalisation of nearly RON1.1bn (€220mn).

“Through the success of the primary public offering of Aquila, a market leader in the segment of distribution of consumer goods, we hope to raise awareness of other local entrepreneurs on the alternative of financing and developing their own businesses with the support of the local capital market,” said Olimpiu Blajut, deputy CEO of Swiss Capital, the brokerage house that intermediated the IPO and listed Aquila’s shares.

Primark to launch in Romania as it pursues CEE expansion
Nato rejects Russian request to withdraw from Bulgaria and Romania
OUTLOOK: 2022 Romania