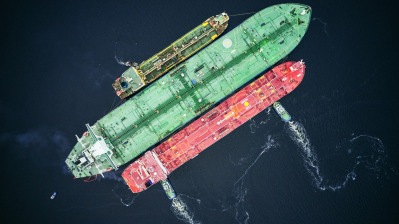 After the oil price cap mechanism was launched on December 5, queues of tankers immediately appeared in Turkish waters as the authorities demanded more document checks to ensure all the Russian vessels are certified. / bne IntelliNews
By bne IntellliNews December 6, 2022

An oil tanker traffic jam has formed off the Turkish coast following the EU’s introduction of a price cap on global Russian crude supplies, the Financial Times reported on December 5. Turkish authorities are demanding new proof of full insurance coverage for vessels passing through the Bosphorus and Dardanelles straits to and from the Black Sea and Mediterranean.

The EU, G7 and Australia brought into force a price cap on Russian seaborne oil exports on December 5, prohibiting shipping and insurance companies from providing services for Russian oil cargoes sold above $60 per barrel. The move is designed to put pressure on Moscow to scale back its war efforts in Ukraine. The measure is significant, as companies in G7 countries provide insurance services for 90% of the world’s cargo, while the EU hosts many of the world’s major shipping companies.

According to the FT, around 19 oil tankers were waiting in line to transit through Turkish waters on December 6. Turkish border control was checking the tankers to see if they could present insurance coverage for potential accidents such as oil spills and collisions.

The Bosphorus is one of the world’s busiest shipping routes, with some 48,000 ships passing through the strait each year. This typically includes over 3% of global oil supply, delivered from Russia and the Caspian Sea region.

The traffic jam is evidence of the market disruption that has been caused by the oil price cap, which was introduced on the same day that the EU placed an embargo on most Russian oil import flows to its member states. Russia warned on December 5 that the cap would destabilise global energy markets, but would have no impact on its ongoing war in Ukraine

There could be greater disruption to come, as Moscow has said it will ban domestic oil producers from complying with the price cap, and will not sell crude to any countries that abide by the measure. Russian Deputy Energy Minister Alexander Novak has said that Russia is prepared to scale back oil production if necessary, potentially putting further upward pressure on oil prices. Analysts at Moscow-based brokerage BCS Global Markets warned that the price cap could knock out some 0.5mn barrels per day of Russian oil supply by the end of the year.

Another factor to watch in the oil market is whether or not China will ease its stringent coronavirus (COVID-19) restrictions, amid wide-scale protests.

Mooted move by Milos Zeman to appoint his own man to key post could have led to drawn-out constitutional dispute.

If the reform of disciplining judges is passed it will mark a watershed in the relations between Warsaw and Brussels, demonstrating the effectiveness of the European Commission's new Conditionality Mechanism.

Heart-rending day after disaster full of stories of survivors trapped under rubble sending desperate voice notes from their mobile phones.