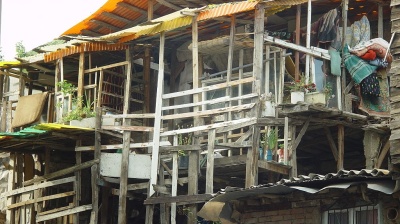 Ramshackle in Istanbul. A perhaps hazardous way of making do in an earthquake-prone city.
By bne IntelIiNews September 11, 2020

The number of impoverished Turks could double this year to nearly 20mn and set back by two decades progress in narrowing inequality in Turkey, a study by Turkish economists Ayse Aylin Bayar, Oner Guncavdi and Haluk Levent predicts, Reuters has reported.

Their academic research helps paint a grim picture ahead of the day when President Recep Tayyip Erdogan allows the lifting of a temporary ban on layoffs amid an unresolved coronavirus (COVID-19) health and economic crisis, possibly as soon as two months from now. By law, Erdogan can extend the ban on layoffs as far as mid-2021 to shield workers, but that would mean a considerable fiscal setback. The pressure to do so could be intense—as the news agency report on the study noted, “[…] Turkey’s mix of low-skilled labour in which a third of workers informally earn cash daily, a private sector dominated by small businesses and public finances already strained from a 2018-2019 recession leaves the country uniquely vulnerable.”

“These are not sustainable policies,” Guncavdi, an economist at Istanbul Technical University who co-authored the study predicting a jump in poverty, was cited as saying as regards coronavirus financial support measures and extending the layoffs ban, already extended by Erdogan for two extra months to mid-November.

“When they are removed, there is potential for upheaval with mass layoffs, a spike in destitution, family structures being tested and potential demonising of minorities and refugees,” he added.

Though a two-month period of selective lockdowns in Turkey ended in June (the government opted against a general lockdown), around four million Turks still rely on state aid to make ends meet, and there are even more informal economy workers who miss out on most of the state financial support.

If the number of impoverished in the country soars in line with the forecasting of the economists, the successes of Erdogan’s ruling Islamist-rooted Justice and Development Party (AKP) over the past 17 years might be seen as essentially reversed.

Government data released on September 10 showed that in the May to July period during which the lockdowns were lifted a record 1.38mn people in Turkey were too discouraged to search for work, up nearly threefold from a year ago. Of those who had jobs last month, nearly half were “very afraid” of losing them by winter, a poll by Istanbul Economics Research found, Reuters said.

While the official unemployment rate—at 13.4% compared to 13% a year ago, but not counting those not recorded as actively looking for work—has been kept relatively stable by state aid and the layoff ban, the employment rate has dropped at unprecedented pace. It fell by nearly 2mn people from last year to stand at 42.4% in the three-month period, the data also showed.

UzAuto Motors is considering a $300mn eurobond issue, according to data published on Uzbekistan’s Unified Portal of Corporate Information on October 30. “We are pleased to inform that UzAuto ... more

Istanbul Municipality receives approval to sell up to €554mn of eurobonds

The Capital Markets Board of Turkey (SPK) has approved Istanbul Municipality’s application to sell up to €554mn of eurobonds, the SPK said on October 22 in its weekly ... more

It was Iran’s Supreme Leader Ali Khamenei who last week directly ordered Iraqi armed factions to halt their attacks on US interests after taking advice from the UK, Middle East Eye (MEE) said in an ... more