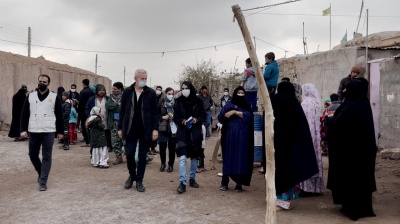 The Norwegian Refugee Council (NRC) on November 10 sounded a warning that as many as 300,000 Afghans have crossed into Iran since the Taliban’s takeover of Afghanistan in August and that hundreds of thousands more are expected to arrive in the coming winter amid harsh below zero temperatures.

Advising that as many as 4,000-5,000 Afghans have been arriving in Iran daily since the Taliban seized Kabul, often via informal border crossings, the NRC called for more international support to help Iran deal with the critical situation, pointing out that the country is in the midst of its own deep economic crisis.

“Thousands of exhausted women, children and men are crossing from Afghanistan into Iran every day in search of safety. Iran cannot be expected to host so many Afghans with so little support from the international community," said NRC secretary general Jan Egeland. "There must be an immediate scale up of aid both inside Afghanistan and in neighbouring countries like Iran, before the deadly winter cold."

"We commend Iran for welcoming and hosting millions of displaced Afghans for the past four decades. But now the international community must step up to support Afghanistan's neighbours," Egeland added.

Iran is often the preferred destination for Shi’a Muslim minorities in Afghanistan who speak a Persian dialect and fear violence and repression from the Sunni Muslim and largely Pashtun Islamist fundamentalist Taliban. Tajikistan is the other neighbour of Afghanistan that speaks a Persian dialect.

Iran and Pakistan together are thought to be hosting around 90% of the 5mn Afghans displaced outside their country, although not all of these are counted as refugees. UN agencies, meanwhile, have said up to 22.8mn people of Afghanistan's 39mn-strong population are facing acute food insecurity as the Taliban regime—still unrecognised as a government internationally and with no access, for instance, to the Afghan central bank’s reserves frozen in the US—threatens to descend into an economic and humanitarian disaster.

Egeland also said: “We’ve heard heartbreaking stories from families that have recently arrived in Iran. One refugee said they were targeted for being Shi’a Muslim, their few remaining possessions were taken, their house burned, and they had to flee multiple times within Afghanistan before reaching Iran. They were told that their daughters would be married off to fighters as soon as they reach the age of 10.”

The United Nations refugee agency’s has launched an appeal to support Afghans fleeing to neighbouring countries. It calls for nearly $300mn to help up to 515,000 people that may flee before the end of the year. The appeal is only 32% funded so far. About $136mn of the total appeal funding is needed to support Afghans in Iran.

The NRC added that while a large number of Afghan refugees are not moving towards Europe yet, all rich nations should both ramp up aid and keep their borders open to those fleeing conflict and persecution. “European nations, including Poland, must stop deporting Afghan asylum seekers and review all failed applications in light of the crisis,” it said.

Iran, meanwhile, is among the most Covid-affected countries in the region. Close to 6mn people have been infected officially, while the number of reported associated deaths is over 126,000. Iran has been vaccinating Afghan refugees, including those undocumented, the NRC said.

Afghan children in Iran, regardless of the legal status of their parents, can enrol in public schools together with Iranian children. “This is an example of one of the most inclusive refugee policies globally,” said the NRC.

Overall, more than half of Afghanistan’s population are in need of humanitarian assistance, according to the United Nations.