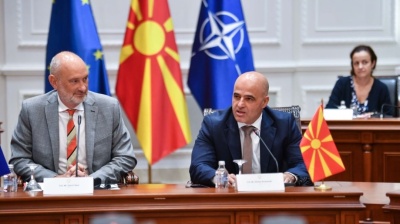 Prime Minister Dimitar Kovacevski at a meeting of the EU Council working group on enlargement. / vlada.mk
By Valentina Dimitrievska in Skopje September 15, 2022

The EU's screening process with North Macedonia officially started on September 15, after the first intergovernmental conference was held in July.

North Macedonia, alongside Albania, waited for two years to start the EU negotiations after receiving the green light from the EU Council. This was due to Bulgarian veto on Skopje related to language and history issues, which also blocked Tirana, which was coupled in the process. The veto was finally lifted in early July. North Macedonia has been an EU candidate since 2005 and Albania since 2014.

“After 17 years of waiting, the screening process with North Macedonia for EU membership opened today in Brussels. We are starting a process in which essential reforms will be deepened for the implementation of EU regulations, for the Europeanisation of the society and the European functioning of the state,” PM Dimitar Kovacevski said.

Kovacevski explained that the process started with explanatory screening of Chapter 5, which related to Public Procurement.

The Macedonian delegation in Brussels is headed by chief negotiator Bojan Maricic, who is deputy PM and minister in charge of European affairs in the Kovacevski-led government.

During September 15-27, meetings will take place on the areas and chapters of the Fundamental Values ​​cluster, when the Commission will present the new legislation for these areas.

The first intergovernmental conference with North Macedonia was held on July 19, but for the second conference to be held, which effectively will mean a start of negotiations, the country has to change its constitution and include ethnic Bulgarians as a constitutional nation.

Under the protocol signed between Skopje and Sofia after the veto was lifted, Bulgaria has the right to block North Macedonia’s progress on its EU path if it is not satisfied with the implementation of its demands.

The EU screening process came two days after parliament speaker Talat Xhaferi rejected the motion of the main opposition VMRO-DPMNE party for holding a referendum against the Friendship Treaty with Bulgaria, which is a key element for the country’s EU progress.

A few days earlier, VMRO-DPMNE filed a motion to the parliament seeking a referendum to abandon the 2017 treaty with Sofia, claiming it is harmful for the country's national interests.

Mickoski said that unless the Friendship Treaty with Bulgaria is abandoned, VMRO-DPMNE will not support constitutional changes. The parliament needs two thirds of votes to pass the changes.

The ruling coalition of Social Democratic Union of Macedonia (SDSM) and Democratic Uion of Albanians (DUI) rejected the calls for a referendum saying that it will undermine the country's EU perspective and that it is another attempt by Mickoski to destabilise the country.

Geopolitics overshadows Western Balkan nearshoring ambitions
Only Hungary and Russia heading for recession in 2023 as Emerging Europe shows its resilience
M&A in Emerging Europe fell by 20% to €32.93bn in 2022