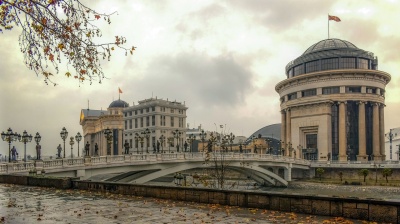 By Valentina Dimitrievska in Skopje October 28, 2021

North Macedonia will hold the second round of local elections on October 31, which will determine whether the new mayor of the capital Skopje will come from the ruling Social Democrats or the opposition VMRO-DPMNE.

In the first round of the election on October 17, independent candidate Danela Arsovska, supported by VMRO-DPMNE, won the largest share of the vote (37.7%) ahead of the current mayor Petre Silegov from SDSM (34.2%), who is running for another mandate.

The battle for Skopje heated up several days before the second round, after the SDSM claimed that Arsovska holds a Bulgarian passport and ID card, which was denied by the VMRO-DPMNE supported candidate.

SDSM presented a copy of a document with the name Daniela (not Danela) Arsovska with an address in Petrich, Bulgaria issued one week after the violent attack on the parliament in Skopje, organised by VMRO-DPMNE in April 2017.

Arsovska was cited by 24mk as saying that she does not possess a Bulgarian passport or ID card, and will seek an “institutional solution” to this matter.

Slavjanka Petrovska, a MP from the ruling SDSM, said at a news conference on October 28 that Arsovska was lying when she denied holding Bulgarian documents, which according to Petrovska are still valid.

Petrovska underlined that it’s not an issue that she has Bulgarian documents, but the fact that Arsovska is hiding them and lying to the public.

“Not only Arsovska, but her whole family has Bulgarian citizenship,” Petrovska said.

“You start the candidacy and the campaign with lies and you are still lying at the end of the campaign,” Petrovska said, adding that Arsovska is maintaining “deep contacts” with other states, namely Hungary and Bulgaria.

“Dishonesty of Arsovska towards citizens opens other questions. For whose interests does Arsovska work?” Petrovska said.

Political analysts cited by Slobodna Evropa said that a “black campaign” usually serves to passivise undecided voters and results in lower voter turnout, leaving the battle only between party supporters.

Bulgarian media used the situation to protect Arsovska as its citizen, even though she denied that she had Bulgarian documents.

Bulgaria vetoed the launch of North Macedonia’s EU accession talks at the end of 2020 over history and language issues, but the authorities in Skopje hope for progress by the end of the year. Bulgaria is also insisting that Skopje respect the rights of Bulgarian citizens in North Macedonia, referring to Macedonians who hold Bulgarian passports taken to enable them to work in the EU countries.

North Macedonia’s Prime Minister Zoran Zaev hinted earlier that he might resign if the ruling Social Democrats lose control of the capital Skopje in the second round of the local elections.

In a TV show Klik Plus broadcasted by TV 21, Zaev said it would not be possible for the country to move forward if the policies at the local level were led by nationalists, referring to the conservative VMRO-DPMNE led by Hristijan Mickoski.

The state elections commission (SEC) announced on October 22 that VMRO-DPMNE won mayoral positions in 21 municipalities in the first round, while the ruling SDSM only won such posts in nine municipalities. The ethnic Albanian Democratic Union of Integration (DUI), the junior coalition partner in the government, won three mayor positions. The country is divided into 80 municipalities plus the capital Skopje.

After the first round of the local elections, Mickoski urged the other opposition parties to unite ahead of the run-off to form a new majority in parliament.

The SEC announced on October 23 that the second round of voting will be held in 44 municipalities plus in the capital Skopje, while the first round will be repeated in two municipalities due to the low turnout.