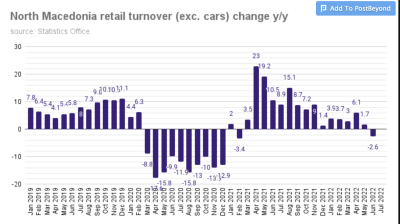 By Valentina Dimitrievska in Skopje August 1, 2022

Retail sales (except motor vehicles and motorcycles) were negative in real terms, even though the growth in nominal terms was even higher from the previous month, 19.3% vs 17.9% in May.

This was due to the accelerated inflation, which speeded up by 2.6 percentage points (pp) from the previous month to 14.5% in June. Last year, the biggest annual increase of retail sales was recorded in April, of 23%, following the lockdown in the same month of 2020.

Stagflation taking North Macedonia back to the 80s

Since the war in Ukraine started Russian President Vladimir Putin’s approval rating has shot up and has remained consistently between 82-83%, according to the independent pollster the Levada Centre.

Russia on track to have a record-smashing grain harvest

Russia is on track to smash all previous records with the size of this year’s grain harvest. Russian President Vladimir Putin said that the bumper harvest could be as big as 150mn tonnes this year on September 27.

Consumer prices in the country increased the most for food and transport.

IMF sees Romania’s economy growing by 4.8% in 2022, analysts are even more bullish

Russia’s industrial output decline slows to only 0.1% in August
2 days ago
Poll shows Putin's popularity took hit in September but remained as high as 77%
2 days ago
Russia on track to have a record-smashing grain harvest
4 days ago
Bosnia posts annual CPI inflation of 16.8% y/y in August
4 days ago
IMF sees Romania’s economy growing by 4.8% in 2022, analysts are even more bullish
5 days ago