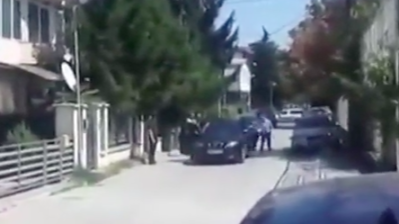 By Valentina Dimitrievska in Skopje August 21, 2019

A court in Skopje decided on August 21 to put outgoing chief special prosecutor Katica Janeva in detention on the request of public prosecutors, one day after she was questioned for the high profile "Еxtortion" case.

The scandal erupted in mid-July when 1TV owner Bojan Jovanovski and his associate Zoran Milevski were detained for extorting money from businessman Orce Kamcev, accused in another case dubbed "Empire" being investigated by the Special Prosecution Office (SPO), tasked to probe high-level crime. Leaked audio recordings revealed by Italian daily La Verita earlier this month showed possible involvement of the SPO's chief in the scandal. Janeva is the third suspect in the case, along with Jovanovski and Milevski.

Speaking to journalists following her four-hour questioning by public prosecutor Vilma Ruskovska on August 20, Janeva said she is not guilty.

Janeva was taken from her home at around 1pm with an immense police presence to the SPO, where her personal laptop was seized. Then she was sent to the Criminal Court in Skopje, where she was questioned by a judge.

“The public prosecution decided to widen the investigation against the prosecutor and will ask the court to approve the detention,” public prosecutor general Ljubomir Joveski said at the news conference, referring to Janeva.

Janeva has been accused of misuse of office for personal gain and the gain of others. According to Joveski, the evidence shows that Janeva gained personal benefit in the form of property (furniture) worth about €5,000, while the other two detainees gained €1.5mn from the extortion.

Prosecutors say that initially Jovanovski and Milevski, who have been in detention since July 16, asked for €8mn from Kamcev promising in return that the SPO's Empire investigation would go in his favour, replacing prison with house arrest, returning his passport and eventually dropping the case against him.

However, they received €500,000 from Kamcev’s wife while he was in prison and an additional €1mn personally from Kamcev while he was under home arrest, which was shown in the leaked recording released by La Verita earlier this month.

Public prosecutors will investigate whether any other people have been involved in the case.

Joveski said that for now there is no order from public prosecutors for the arrest or search of homes of any politicians.

He added that the case should not be politicised as there is no evidence that the extorted money ended up in the hands of any domestic or foreign politician.

Macedonian President Stevo Pendarovski previously urged prosecutors to examine the ongoing scandal urgently, saying he was deeply disappointed about the revelations in the leaked audio recordings.

The SPO was set up in 2015 under the EU-mediated Przino deal, which ended the political crisis following the wiretapping scandal that broke earlier that year.

The SPO was one of the institutions which enjoyed great support from citizens who hoped it would solve crime and corruption-related cases connected to the previous VMRO-DPMNE government, but expectations faded following the scandal.

Now, Janeva's arrest is expected to restore trust in justice institutions among citizens.

Reform of the judiciary system is one of the crucial demands made by the EU before North Macedonia can obtain a date to start EU accession talks in October.

Janeva tendered her resignation on the day that Jovanovski and Milevski were detained in mid-July but said it was to open the way for the governing Social Democrats to settle their differences with the main opposition VMRO-DPMNE party over the new law on prosecution. She said at the time she will keep her position until a new chief special prosecutor is appointed.