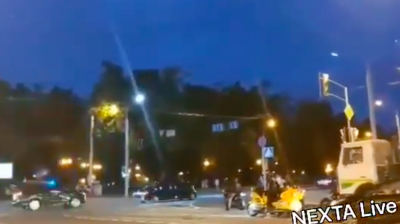 Police were snatching random pedestrians from the street to create a "climate of fear" to quell dissent.
By Ben Aris in Berlin July 4, 2020

Belarus celebrated its Independence Day on July 3 and while there were no large-scale protests, police continued to snatch pedestrians from the street in random arrests as tensions remain high.

Video on social media showed footage of police leaping out of vans and forcibly detaining pedestrians, especially if they were in knots. Belarus watchers speculate the policy of random arrests is to dissuade the people from going outside or attending public gatherings and accuse the government of instigating a “climate of fear”.

In one incident video posted online on July 3 from the town of Brest shows police leaping from a van and dragging a random pedestrian, who is showing no sign of protest or any other inflammatory action, into a waiting van.

“Police in Brest arrest a man who went out for a walk with his family during the independence day. He's not an opposition activist, just another of hundreds of random people who were arrested in Belarus in recent weeks to discourage [people] from any mass activity ahead of the election,” Tadeusz Giczan, an academic in London that follows Belarusian politics, said in a tweet.

In another incident on Belarus’ Independence Day, at least six police officers detained an activist and medical worker Alena Davydova in Homiel, right outside her home. She was dragged screaming to a SUV in front of visibly shaken neighbours.

“There were targeted detentions in other cities, such as Masty and Barysau. Today, #Belarus celebrates its official Independence Day, but the police are busy,” Hanna Liubakova, a local journalist, tweeted.

Some of those arrested and released the same day gathered for group pictures that they posted online, wearing T-shirts with the date of Independence Day emblazoned on them, July 3, as a dig at Lukashenko; the president has been lampooned as “Sasha 3%” for his supposedly 3% support in online polls.

However, disapproval of Belarus President Alexander Lukashenko remains high. The president’s cortege drove through central Minsk on July 3, only to be greeted with a cacophony of horn blasts by cars halted by police to allow the president to pass. Horn honking has been a mark of the dissent, as drivers show their solidarity, with pedestrians forming human chains in protest.

The honking became so persistent that police rerouted the cortege and drove through side streets rather than use the main roads, to avoid the aural protests of stationary traffic.

The public protests have died down after they began on June 18 following the arrest of ex-banker and leading opposition candidate Viktor Babariko.

That is partly due to there being an opportunity for mass gatherings during the signature collection phase of the presidential election, when it became legal to gather as candidates canvassed for names. However, with the deadline for submission of signatures passed, that window has closed and police are free again to ban public gatherings.

Another window for legal mass gathering will open on July 14 after the results of the application process are over and the official presidential campaign period starts, Giczan told bne IntelliNews. So far, the Central Election Commission (CEC) has accepted seven applications, including two opposition candidates, but has already disqualified Valery Tsepkalo, one of the three leading opposition candidates, by rejecting more than half his signatures.

The blatant repression of the Belarusian police has caused widespread condemnation from around the world and has effectively isolated Lukashenko, who ironically has been enjoying improved relations with the West in the last two years as the EU and the US try and drive a wedge between Minsk and Moscow. The US re-established diplomatic ties with Belarus in April by appointing a new ambassador, after leaving the US embassy in Minsk vacant for a decade.

At the same time, relations with Moscow have soured as the cash-strapped Russian government has begun to withdraw energy subsidies that have propped up Lukashenko’s neo-Soviet economy for decades.

With no political allies to rely on and now facing the opprobrium of the people ahead of the August 9 presidential election, Lukashenko is increasingly isolated. He reacted to the growing threat to his power by sacking his entire government and appointing members of the siloviki, or security services fraction, to all the top posts. The leading opposition candidates and a bevy of leading critical bloggers have also been detained. Human rights groups say that the number of political prisoners in Minsk has jumped from 14 to a total of 17 as a result of the crackdown in what Amnesty International has dubbed a “purge.”

“There are several factors working against a revolution,” Kokcharov said. “One is that there are no students in Minsk to be radicalised, as they have all gone home for the summer holidays. Everyone is at the dacha. The other factor is the police in Minsk [are] very brutal and there are not enough people willing to be beaten for their political freedoms.”

The upshot is that while the protests will continue, the most likely scenario is that Lukashenko will rely on repression and falsification of the vote to win the election and remain in office. The president has been talking about constitutional reforms for more than a year already, and brought the subject up again in the last week, suggesting he is hoping some concessions will be enough to quell the unrest and return things to the status quo.

Kokcharov speculates that if this scenario plays out the young or unattached will simply emigrate to find work elsewhere in a less oppressive environment.