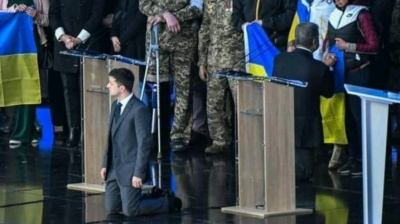 During his inauguration speech Ukrainian President Volodymyr Zelenskiy promised the first thing he would do is end the fighting in Donbas
By bne IntelliNews May 23, 2019

The team of Ukrainian President Volodymyr Zelenskiy is considering holding a referendum on concluding agreements with Russia to bring peace in the Donbas war, head of the presidential staff Andriy Bohdan said on May 21.

"We are considering the possibility of bringing the issue of reaching a peaceful agreement with Russia to a national referendum so that not only the deputies will vote and the president make the decision, but the people could made the decision and the society give an assessment," Bohdan said in a televised interview.

He added that the new Ukrainian leadership is forced to seek "a compromise" over the nation's relations with Russia. "The only thing that Zelenskiy said that we do not trade in our territories and our people," Bohdan underlined.

On May 22, former Ukrainian President Petro Poroshenko slammed this idea, pointing that he was "unpleasantly" surprised by the odd stance that the issue of the so-called 'peace agreements with Russia' must be resolved at a referendum. "The country is concerned that it is surrender rather than 'peace agreements,'" Poroshenko tweeted.

He advised Zelenskiy's team to dispel rumours that are either "an unsuccessful improvisation of a deliberate act directly threatening our country's integrity and sovereignty." Poroshenko added that he is confident that it is necessary to adhere to the stance developed in the past five years that "Ukraine is above all things and Russia is an aggressor."

The same day, Ukrainian iconic rock musician Svyatoslav Vakarchuk, who is establishing his own political party with the aim to take part in the snap parliamentary elections, branded the idea of the peace referendum "dangerous and irresponsible".

Meanwhile, the Kremlin's spokesman Dmitry Peskov said on May 22 that Moscow is awaiting practical steps of Kyiv towards normalising bilateral relations and fulfilling the Minsk agreements.

"We are waiting for any practical steps from Kyiv, first and foremost, toward fulfilling the Minsk agreements and resolving the Ukrainian domestic problem in the southeast, and, secondly, toward normalising bilateral relations with Russia. We are awaiting these steps, but we have not seen any," Interfax quoted Peskov as saying.

He added that the referendum on bilateral relations with Russia is an internal affair of Ukraine. "It's none of our business to say whether it's a nice idea or not. More importantly, it should be fruitful and effective," he said.

On May 21, Zelenskiy said in his inaugural address that "the first task" of the new leadership should be a ceasefire in Donbas.

Over the past years, Ukraine as well as the so-called Normandy format representatives (Germany, France, Ukraine and Russia) failed to secure any significant progress during talks on settling the conflict, which erupted in 2014 as pro-Russian separatists in East Ukraine broke away from Kyiv's central control. Around 11,000 servicemen, rebels and civilians have so far died.

In 2018, 279 civilian casualties, including 55 dead and 224 wounded, were observed by the United Nations (UN) human rights monitoring mission in Ukraine (HRMMU).

Ukraine's international reserves increased to $28bn as of the start of May
Ukraine’s consumer price inflation slowed to 8.4% in April
KYIV BLOG: Blinken in Kyiv

Kyrgyzstan hits Canadian gold mine operator with $3.1bn fine and unveils law on state takeovers of companies
8 hours ago
ECHR deals big blow to Polish government-dominated top court
19 hours ago
Germany deal to buy Sputnik V dead, but India to receive 360mn doses
19 hours ago
Lukashenko signs decree on the transfer of power in the event of his death
20 hours ago
Amnesty International restores Navalny’s Prisoner of Conscience status
1 day ago