A new railway connecting Central Asia with the Persian Gulf through Iran was officially opened on December 3. With Kazakhstan completing its east-west rail line that links the country's centre to the west earlier this year, the new international railway line now offers direct passage for Chinese goods to Iran and on to the Gulf, as well as Europe via Turkey.

Kazakh President Nursutlan Nazarbayev, Turkmen leader Gurbanguly Berdymukhamedov and Iranian President Hassan Rouhani opened the new Ozen-Gyzylkaya-Bereket-Etrek-Gorgan railway line on the Turkmen-Iranian border on December 3. The line is part of the international North-South corridor. The length of the Kazakh section of the railway is 146 kilometres, Turkmen 700km and Iranian 82km. The parties signed the agreement on the construction of the railway link in 2007 and construction started in 2009.

The project means that Kazakhstan now has a direct line to Turkmenistan and Iran, bypassing Uzbekistan and cutting the route by hundreds of kilometres. Together with the new east-west railway line from Beyneu to Zhezkazgan opened by President Nazarbayev in August, the lines will drastically cut the transit time for Chinese goods to Europe via Russia and the Middle East.

In addition to rivalling sea routes for Chinese cargoes, the new rail lines should spur the development of Kazakhstan’s central and Aral Sea regions, hopefully attracting investment in raw minerals and industrial projects. The Beyneu-Zhezkazgan rail line will enable Chinese cargo to cross Kazakhstan along an almost straight east-west line, cutting the transit route across the country by around 1,000km. The 1,036km line, which cost KZT561bn ($3.6bn) to build, will now link to the new Kazakhstan-Turkmenistan-Iran line.

From the Kazakh perspective, the new rail links will have huge strategic importance, as they allow for the diversification of transport routes for the country’s main export commodities and energy resources if need be.

Railway transport is more expensive than pipeline, but it can be used as an alternative option in case of interruptions to traditional routes. This might prove pertinent given the current geopolitical turmoil over Russia’s role in the civil war in Ukraine and tensions in the South China Sea. Styling Kazakhstan as a key transit hub on the China-Europe cargo route, Astana reasons the direct railway link between China and Europe via the Eurasian Economic Union (EEU) member states of Russia and Belarus will entice exporters from central and western China to consider the trans-Eurasian railway networks as an alternative to sea routes, which cross disputed waters in the South China Sea.

Since Kazakhstan is part of the Russia-led Customs Union that will be transformed into the EEU in 2015, Chinese cargo travelling by rail will undergo customs clearance only once on the Kazakh-Chinese border, and this, the Kazakh government claims, will cut travelling time between Chinese eastern seaboard and the EU's eastern borders to just 10-11 days, versus up to 44 days by sea and 14 days along the Trans-Siberian railway. In order to boost the transit of Chinese cargo by rail, Kazakhstan intends to increase the capacity of the existing Dostyk-Alashankou railway corridor from the current 23mn tonnes a year to 50mn tonnes. In 2012, Kazakhstan commissioned the second Zhetygen-Korgas railway link to China with a capacity of 12mn tonnes per year, with a prospect of increasing that to 33mn tonnes per year.

Initially, the new international route will be mostly used for exports of Kazakh grain and possibly metals: the first cargo transported via the new line was grain; Iran is among the traditional importers of Kazakh grain. With Iran set to see imports of Kazakh grain rise from 345,600 tonnes in the 2013-2014 marketing year to 1.2mn in the current marketing year that started on July 1, Iran will account for 14% of Kazakhstan's total grain exports. In order to boost grain exports, Astana also plans to build grain terminals and storages on the Turkmen-Iranian border. 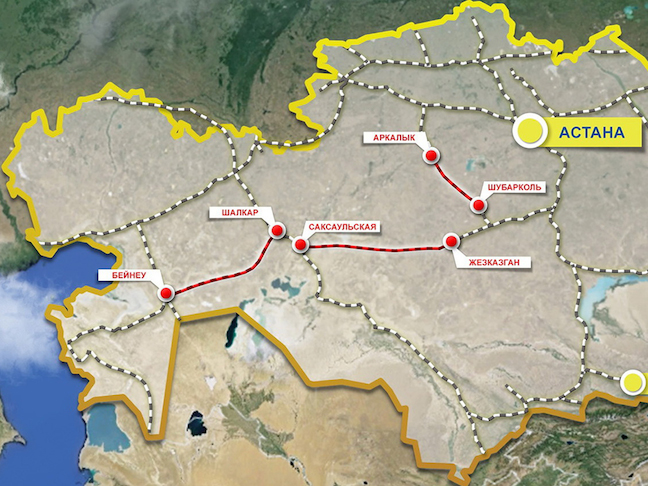 For Turkmenistan the railway is the first big infrastructural project that makes it a transit country; for Iran the project demonstrates that it can be a reliable partner in such international transport projects.

Turkmenistan is also involved in building a railway line to Tajikistan via Afghanistan, bypassing Uzbekistan. Tajikistan and Uzbekistan are currently at loggerheads over Dushanbe’s construction of what will be the world's tallest dam, Rogun, which will have a huge effect on irrigation for Uzbekistan’s cotton fields. In retaliation, Tashkent cut off Tajikistan from its railway networks to prevent construction materials from reaching the upstream country. The construction of the new 400km-long rail line that will bypass Uzbekistan started last summer and is expected to be completed in 2016. When commissioned, the new line will break Tajikistan's transport isolation and link the country to the Middle East and Russia via Iran and Kazakhstan.

It is worth noting that these rail projects are also in line with China’s grand strategy of building transport corridors along what it dubs the “Silk Road Economic Belt” to be used to transport Chinese goods exclusively via railway to Europe. A railway connection between Iran and Turkey has been in place for years now, while the Marmaray project linked the European and Asian parts of Turkey by rail last year.

Over hill and mountain

In addition to railway links via Kazakhstan, China is also considering the construction of a railway line to Uzbekistan via Kyrgyzstan. However, this project has become bogged down because Kyrgyzstan wants the line to link its northern and southern regions, while China and Uzbekistan advocate a shorter, more direct route between China's Kashgar and Kyrgyzstan's Osh cities.

Kyrgyzstan's northern regions are separated from the south by mountain ranges, and heavy snow and mudslides complicate overground links in winter. Using China's experience of building railways in high mountainous areas, Bishkek hopes to acquire a reliable transport connection all year round. The Kyrgyz government also fears that the route suggested by China and Uzbekistan could well drive a further wedge between the country's south and its north, giving ammunition to separatists. With China's expertise and financial support Tashkent is already building a railway tunnel under the 2,200-metre Kamchik pass to link the Uzbek part of the Fergana Valley and the country's centre.

However, with Kazakhstan's track record of successful transport projects and willingness to attract as much transit cargo as possible, Kyrgyzstan's reservations over the China-Kyrgyzstan-Uzbekistan railway route could well make it obsolete, further boosting Kazakhstan's transit potential for China.