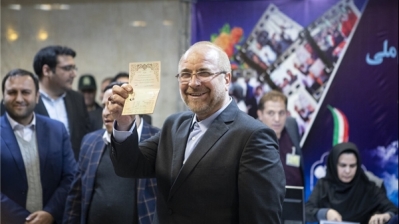 Ghalibaf is back in the limelight.
By bne IntelIiNews May 28, 2020

Iran’s newly formed parliament—under the sway of so-called hardline “principlists” meaning the government of pragmatic and moderate President Hassan Rouhani could face major obstacles in pushing its programme through and the country's foreign policy could grow tougher—on May 28 elected former Tehran mayor and air force commander Mohammad-Bagher Ghalibaf as its new speaker.

Ghalibaf, also a former national police chief, thus returns to a top role in Iran. Some critics see the 58-year-old as renowned for "changing direction and sides with the wind". IRIB said he received 230 votes of the 267 cast to secure the highly influential position in the parliament, or “Majlis”.

Despite his long-term exposure in Iranian politics, Ghalibaf has failed to win the presidency three times, with his changing stance on several topics undermining his reputation with voters. He is most famous for his decade-long stint as Tehran’s mayor, during which time he was responsible for ploughing money into high-profile projects like the expansion of the Tehran Metropolitan Railway and the construction of several motorways.

Ghalibaf is also the first representative of the Islamic Revolutionary Guard Corps (IRGC) top flight to become the speaker of parliament. Despite having no active role in the Guards currently, he wears their fatigues at events and espouses the ideals of the elite corps, which has huge business interests across Iran’s economy as well as its own parallel intelligence and military hierarchies.

Ghalibaf became a Tehran MP in the parliamentary elections earlier this year. They saw a record low turnout at a time that the coronavirus (COVID-19) was spreading like wildfire around the country.

Ghalibaf succeeds speaker Ali Larijani, who held the post for 12 years, but sat on the political fence. He is expected to move into academia and away from public life, perhaps taking up a lectureship role at a university in Tehran.

The sea change in the composition of the Majlis came about after many reformist lawmakers were barred by the theocracy’s Guardian Council from standing for re-election by the authorities. That left many voters with a choice between hardline and conservative candidates. The latter push for more engagement with the outside world than their hardline counterparts.

The Majlis has represented a cross-section of the Islamic elite in the past 40 years, including a growing number of female representatives. It reserves five seats for ethnic minorities including the Assyrians, Armenians, Jews and Zoroastrians, as per the constitution written in 1980, the year after the Islamic Revolution.