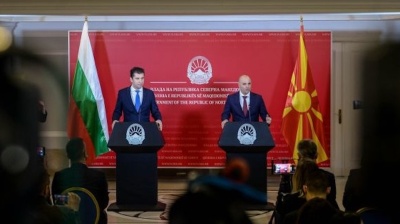 Bulgarian Prime Minister Kiril Petkov met his new counterpart from North Macedonia, Dimitar Kovacevski, in Skopje on January 18, giving a new impetus to the strained relationship between the two countries.

The visit by the Bulgarian delegation led by Petkov, who came to power in December, comes only a month after Sofia vetoed the launch of EU accession talks with Skopje for a second time and just two days after Kovacevski was elected prime minister, replacing Zoran Zaev.

The two prime ministers promised to work on all issues with a new approach and dynamic to improve their relations, which is crucial for opening the way for North Macedonia’s EU integration, which has been stalled due to the Bulgarian veto for the last two years. The veto also prevents Albania from launching EU accession talks, as the two countries are coupled in the process.

At the joint news conference, Kovacevski announced that at the meeting with Petkov they solved the issue of using the short name of North Macedonia and that Sofia dropped previous claims that the short name implies territorial claims against Bulgaria.

“Bulgaria will not block the use of the short name and accepts to use the short name of the state, equally to the long one [Republic of North Macedonia]," Kovacevski said, adding that the UN will be informed about the decision.

Kovacevski underlined that solving this issue represents a step forward in the new chapter of relations between the two countries and will pave the way for better cooperation.

“We had a very good and friendly conversation. Good neighbouring relations will deepen and will be measured by achieved results,” Petkov said.

He announced that both sides agreed on launching Sofia-Skopje flights, which will become a reality in the next two months.

For Kovacevski, the history and language issues won’t be a priority in the dialogue, but the building of good neighbourly relations and restoring trust among citizens.

The two PMs agreed to intensify cross-border cooperation and in that regard a new border crossing point, Klepalo, will be opened soon.

On January 25, the two governments will hold a joint meeting and working groups will be established to work on different areas such as infrastructure, education, the economy, trade and culture.

“There will be a meeting of the groups each week so the cooperation to be intensified. We expect results every week,” Petkov said.

Kovacevski left the news conference with a puzzled look, holding an apple in his hands, a present from a Bulgarian journalist as a symbolic gesture.

“Let me give you a fresh, red Bulgarian apple as a sign of trust and that you will preserve the unity between Bulgaria and North Macedonia,” she said.

Earlier in January, Bulgarian President Rumen Radev confirmed Sofia’s firm position towards North Macedonia, saying that Bulgaria should not give up any of its demands on Skopje

Even though the tone of the meeting was positive, the two PMs have difficult tasks to tackle the most fragile issues in the near future, such as the history and the treatment of the Macedonian language, which Bulgaria claims has Bulgarian roots, something which is unacceptable for Skopje.

The visit coincides with the 30th anniversary of the Bulgarian recognition of the independence of the country, formerly known as Macedonia, from former Yugoslavia. The country changed its name to North Macedonia under the 2018 Prespa name deal with Greece.

No progress in talks between Bulgaria, North Macedonia on lifting veto on EU accession talks