Greece's newly elected radical government sent shockwaves through Europe on January 27 when a spokesman for new Prime Minister Alexis Tsipras protested that Greece had not approved a statement from EU heads of government on possible further sanctions against Russia. The EU statement, calling for states to "consider further sanctions", was a response to escalating fighting in East Ukraine blamed by many EU states and the US on Russian-backed rebels.

“The aforementioned statement was released without the prescribed procedure to obtain consent by the member states and particularly without ensuring the consent of Greece,” the Greek statement said. “In this context, it is underlined that Greece does not consent to this statement.” The statement added that Tsipras - elected PM on January 25 - phoned EU foreign relations head Federica Mogherini to express his “discontent".

The Greek statement raises doubts on whether its new government, led by the radical leftist Syriza party, but also containing the nationalist Independent party, will support the continuation of existing EU sanctions on Russia in response to alleged Russian aggression in Ukraine. The sanctions expire in March unless renewed by the unanimous decision of EU member states.

And whereas attention on Tsipras' Syriza party focussed during the election campaign on the party's opposition to the terms of Greece's EU €270bn bailout, the Greek protest on January 27 has now focused attention on Syriza's and its allies' ties to Moscow.

BBC correspondent in Athens Gabriel Gatehouse was the first to sound the alarm, tweeting that the first foreign diplomat to meet Tsipras after he assumed the post of prime minister was Andrei Maslov, Russia's ambassador to Athens.

This foregrounded Syriza's track record of support for Russia over the Ukraine crisis, including for Russia's annexation of Ukraine's Crimea region in March 2014. Tsipras voiced support for the Crimean “referendum” that paved the way for the annexation and a first round of Western sanctions on Russia: he said that the EU “is shooting itself in the foot” by imposing sanctions and that Ukraine's pro-EU government contains “neo-Nazis", as quoted by New Europe.

Post-Crimean annexation, in May 2014, Tsipras visited Moscow to meet with Putin allies, such as Valentina Matvienko, chairwoman of Russia's Federation Council, and Aleksei Pushkov, chairman of the Duma's foreign affairs committee, both of whom were already under EU sanctions after Russia's annexation of Crimea.

A Syriza foreign affairs spokesman openly called sanctions on Russia “neocolonial bulimia", as quoted by the Financial Times, and has praised the military campaign waged in East Ukraine by Russian-backed rebels.

Concerns over Greece are not restricted to Syriza, but also to the leftwing party's choice as coalition partner: nationalist party Independent Greeks (Anel), a party that has also taken a pro-Russian line, according to Ukrainian researcher Anton Shekhovtsov.

Panos Kammenos, founder of Anel and Greece's new defence minister, was quoted in Greek media as saying in May 2014, in the aftermath of the annexation of Crimea, that "we publicly support President Putin and the Russian government who have protected our Orthodox brothers in Crimea".

Shekhovtsov revealed that Kammenos visited Moscow on January 15, 2015, at the peak of the fierce election campaign, to meet with Putin's parliamentary allies in defence and foreign affairs. After the meetings, Kammenos declared his opposition to EU sanctions on Russia: "Anel is ready to create a European-wide group involving political forces from South European countries, the economy of which has been damaged as a result of the EU economic sanctions against Russia," he said. "The aim of this group will be a reversal of this process that affects more the EU countries and less Russia," he said, as quoted by Shekhovtsov.

Shekhovtsov posted photos of the meetings. “With Russian tool Panos Kammenos as new Greek Minister of Defence, Nato information security is obviously at risk,” he commented. In addition, Syriza’s 2013 manifesto  calls for Greece to exit Nato.

There are also questions about the pro-Russian leanings of Syriza's new foreign minister, Nikos Kotzias. Shekhovtsov dug up potentially compromising photos of Kotzias meeting with Aleksandr Dugin - the leading representative of Russia's ultra-nationalist 'Eurasianist' wing of thought (Kotzias is far left in photo, Dugin centre).  Dugin has called for a dictatorship in Russia and creation of a Russian empire across Eurasia. 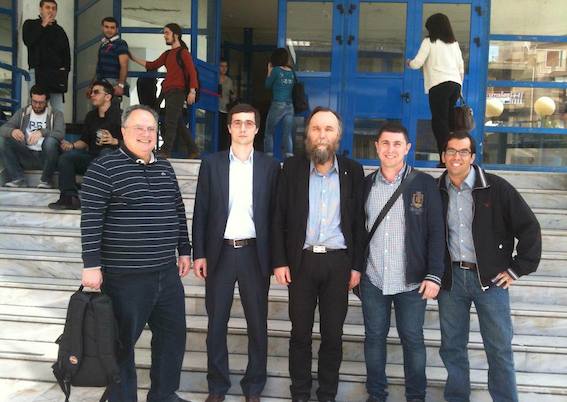