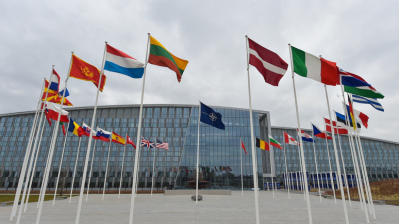 Nato member flags: a spokesperson for the Alliance says there are no second class members. / Nato
By bne IntelliNews January 23, 2022

Both Nato and the governments in Bucharest and Sofia have firmly rejected Russia’s request that Nato forces withdraw from countries that joined after 1997.

The request came amid a worsening of relations between Russia and the West, and ahead of the start of a new round of talks between US Secretary of State Antony Blinken and Russian Foreign Minister Sergei Lavrov.

The meeting is aimed at trying to find any common ground between the two sides in a bid to stop the crisis from escalating, though both  Blinken and Lavrov have said they don't have much hope for progress.

As bne IntelliNews has reported, Russia has already started moving troops into Belarus ahead of unscheduled military exercises there in February, and the Kremlin has just sent naval craft from the Baltic Sea to the Black Sea for more exercises; these will arrive in the next 10 days.

On the western side, Blinken announced on January 18 that the US will give Ukraine an additional $200mn for weapons. The following day, US President Joe Biden said Washington will step up its troop presence in eastern Nato members — such as the two Black Sea states — Russia sends more forces into Ukraine.

“We’re going to actually increase troop presence in Poland or Romania, et cetera, if in fact he moves, because we have a sacred obligation with Article 5 to defend those countries because they’re part of NATO,” Biden told a White House press conference.

This prompted Moscow to call on Nato to withdraw forces, equipment and weapons from its newer members, which include several of the former eastern bloc states.

“We are talking about the withdrawal of foreign forces, equipment and weapons and other steps in order to return to the configuration as of 1997 on the territory of countries that were not Nato members on the specified date. These include Bulgaria and Romania,” Russia’s Foreign Ministry said in a statement in a response to a request for clarification by journalists.

Nato spokesperson Oana Lungescu responded on Twitter: #Russia’s demands [would] create 1st & 2nd class #Nato members, which we cannot accept. We reject any idea of spheres of influence in Europe. And we will not renounce our ability to protect & defend each other. My response to @mfa_russia claims re @Nato Allies #Bulgaria #Romania.”

Lungescu also posted a longer Nato statement on the issue that said: “Nato will not renounce our ability to protect and defend each other, including with the presence of troops in the eastern part of the Alliance. Russia’s demands would create first and second class Nato members, which we cannot accept. We reject any idea of spheres of influence in Europe. We will always respond to any deterioration of our security environment, including through strengthening our collective defence. NATO is vigilant and continues to assess the need to reinforce the eastern part of our Alliance.”

Officials in both Romania (which borders Ukraine as well as having a Black Sea coast) and Bulgaria also firmly rejected the Russian statement.

“The Romanian [Ministry of Foreign Affairs] MFA reminds that [the] Nato presence in Allied states, which is the result of decisions taken at highest level by Allied leaders and implemented by the respective Allied political and military structures, is a strictly defensive reaction to the increasingly aggressive behaviour of the Russian Federation in the Eastern Neighbourhood, especially starting with 2014, when the Ukrainian territory Crimea was illegally occupied by Russia. This behaviour continues to intensify in the present, despite Nato's attempts to engage in constructive dialogue,” the statement said.

“The demand that Nato posture of forces in all Allied states which joined after 1997, including troops, to be reduced according to Moscow's requirements is already included in Russia’s list of demands regarding European security, made public in December 2021. This demand has already been unequivocally rejected as unacceptable by the North-Atlantic Alliance, both publicly as well as within the Nato-Russia dialogue and the US-Russia dialogue. Such a demand is unacceptable and cannot be negotiated.”

Previously, Romanian officials had welcomed Biden’s statement. “I welcome the explicit announcement of President @JoeBiden to increase the US  military presence in Romania , on the Eastern Flank, if the security situation deteriorates further. RO-US Strategic Partnership and @Nato solidarity are very strong,” said Romanian President Klaus Iohannis on Twitter.

The demand also raised tensions in Sofia and provoked an immediate reaction.

“Bulgaria is a sovereign state and has made its choice long ago by becoming a Nato member. As such, we decide for ourselves how to organise our country’s defence in coordination with our partners. The Washington Treaty does not provide for a second category of member states for which collective defence will be applied selectively or to a limited extent,” Prime Minister Kiril Petkov said in parliament in response to the Kremlin.

He called on Russia to remain committed to a constructive dialogue to de-escalate tensions.

President Rumen Radev also addressed the issue in a statement on January 21. He said that Russia’s insistence on the withdrawal of Nato forces from Bulgaria was unacceptable and pointless. Radev noted that there are no permanently based allied contingents and military equipment in the country and that it is up to Bulgaria to decide on such presence.

“Our country does not accept ultimatums from anyone,” Radev said.

“We call on the Russian Federation to show respect for the conscious foreign policy choice of the Republic of Bulgaria for Nato membership and for the decisions of the Bulgarian Constitutional Court,” the ministry said in the statement.