It was entirely predictable: the same day that Tim Cook, the CEO of Apple, came out and declared that he was the first openly gay boss of a Fortune 500 company, the Russian Duma said they would ban him from Russia for life.

“What could he bring us? The Ebola virus, AIDS, gonorrhea? They all have unseemly ties over there,” St Petersburg city council member Vitaly Milonov said, who is famously homophobic. "Ban him for life."

Russia has been lambasted for its homophobic attitudes. The so-called "gay propaganda" law that was passed earlier this year is nominally designed to protect minors from what the authorities have in effect painted as a sexual perversion. The law nearly makes explicit a link between homosexuality and paedophilia, which has long ago been proven to exist only in the minds of homophobes.

While Russia's anti-gay stance has caught most of the headlines, the problem of sexual discrimination is a big problem in the whole former Soviet bloc. Stuck behind the Iron Curtain during the 1950s and 1960s, the whole of Central and Eastern Europe is just starting to grapple with the civil rights issues that the West has more-or-less put behind it.

Just this year the governments in both Moldova and Kyrgyzstan floated their own versions of Russia's anti-gay propaganda law; the authorities in the Serbian city of Belgrade tried to ban a gay pride march; Georgia considered a ban on same-sex marriage; videos emerged of Ukrainian gays being viciously beaten with impunity by local homophobes; an Armenian court allowed a newspaper to publish a "gay blacklist" outing homosexual public figures; a young man in Azerbaijan killed himself after his parents found out he was gay; and Albania was dubbed "Europe's most homophobic country." I could go on. The list is very long.

What is behind this intolerance is not illiberalism per se, but simple ignorance and the fundamentally conservative nature of almost all eastern European societies. The Kremlin's new "anti-propaganda" vehicle, the newswire Sputnik, summed up the clash in cultures very neatly in a November 12 editorial entitled, "Five things that drive the West mad about Russia."

"Russia is a conservative country and is becoming more and more so with every passing day," wrote RT commentator Peter Lavelle. "Religious belief is on a comeback in Russia and in a very big way... The vast majority of Russians have become disenchanted with the West and its messages. Bearded women, gay marriage and non-traditional notions of the family are ideas from afar and not realities most in Russia accept at home. This does not mean there is an absence of tolerance. Non-traditional lifestyles and alternative beliefs are accepted, but not promoted by the state. This is a popular and supported position."

The conservatism of all CEE societies is in no way a justification for the intolerant attitude to minorities that most of these countries have adopted (not just to the LGBT communities), but it does present a nasty problem for the West of how best to address the issue.

Clearly association with the EU is good news for the LBGT communities in the former Soviet bloc, but the progress remains a top-down process driven by pressure from Brussels. In the most recent example, on November 6 Latvian Foreign Minister Edgars Rinkevics came out on Twitter, the first sitting minister to openly admit he is gay, not only in the somewhat more liberal Baltics, but of any state in CEE. However, despite the Baltics' reputation for being the most "western" of the eastern European states, even Rinkevics was anticipating a storm of reaction.

”Our country must create a legal framework for all types of partnerships, I will fight for it, I know that there will immediately be megahysteria but #Proudtobegay," Rinkevics wrote on Twitter. As it turned out, instead of being demonised, Rinkevics received overwhelming support for his bold stand by the twitterarti following his declaration – though not, needless to say, by Russian politicians.

Estonia leads the pack on putting sexual minorities on the same legal footing as everyone else. Its parliament approved same-sex partnership legislation on October 9 that will go into effect in 2016. But the fight is still uphill: all the mainstream parties in Latvia and Lithuania immediately said they would never back such legislation in their countries. And these sorts of laws remain anathema anywhere to the east of the Baltics.

The entire region remains conflicted to different degrees by the broad set of civil values we take for granted in the West, torn between the duty to adopt European values that comes with EU membership, and the extremely conservative values that are grounded in the Orthodox church.

Georgia is probably the best example. Probably the most Westernised country east of Tallinn, former prime minister Bidzina Ivanishvili told journalists that sexual minorities should have equal rights in May this year, though a gay pride march in Tbilisi the same day quickly became violent when anti-gay groups attacked the crowd. Home to more churches per square kilometre than any other city in the world, 12 people were taken to hospital, including three policemen and a journalist.

Homophobia has been institutionalized in Russia and several other countries in the region. And the current break with Europe will only make things worse for Russian gays.

Boris Yeltsin reluctantly decriminalised homosexuality in 1993, but only because it was a prerequisite for joining the Council of Europe. The government didn’t announce the fact at the time and the news only leaked out gradually as the police stopped arresting gays. Homosexual sex between consenting adults remains legal, but the terms of the recent gay propaganda law are so vague it is now in effect illegal in Russia to even talk to your children about LGBT issues.

RT's Lavelle is right in that the already conservative Russian society is becoming more conservative as Putin rallies the population to the nationalist flag. A survey from the independent Levada Centre found earlier this year that 68% of Russians support the gay propaganda law and only 7% were against it. A similar poll by the state-owned VTsIOM earlier this year found that 85% of Russians are against same sex marriage with only 5% for it. And both pollsters found the trend is towards less, not more, tolerance.

What's to be done? How can a deeply conservative and traditional country like Russia make progress on this, one of the most divisive debates in society? And how can the West help?

We know how to fight bigotry in the West, as we have been doing it for 50 years: confrontation and blind condemnation is not the way forward.

In the November 2013 issue of the Atlantic magazine, Jonathon Rauch, a gay activist and contributing editor, took on homophobic author Orson Scott Card by condemning a call for a boycott of his newly released book-turned-movie Ender's Game. "I have been advocating gay marriage and gay equality for more than 20 years… In a roundabout but important way, bigoted ideas and hateful speech play an essential part in advancing minority rights. Even if we have every right to boycott Ender’s Game, gays are better served by answering people like Card than by trying to squelch or punish them," Rauch wrote.

US President Barack Obama snubbed Vladimir Putin's invitation to the Sochi Olympics over the gay rights issue (among other things), but Rauch argues that confrontation goes nowhere; you have to engage your enemy.

In 2004 Rauch was on a radio talk show to promote a book on gay marriage debating a prominent gay marriage opponent. After the show, a listener called in complaining, "Your guest is the most dangerous man in America, because he sounds so reasonable."

"In hindsight, this may be the greatest compliment I have ever been paid. It is certainly among the most sincere," Rauch wrote. "Despite the caller’s best efforts to shut out what I was saying, the debate he was hearing — and the contrast between me and my adversary — was working on him. I doubt he changed his mind that day, but I could tell he was thinking, almost against his will."

Rauch would argue that rather than drive a wedge between Russia and the US over the gay issue by not showing up for the Olympics, the US should be sending planeloads of gay sportsmen, artists, engineers, bankers, cooks, politicians and scientists to Russia. It is only through proximity and familiarity that Russians can be convinced homosexuals are not a threat or even different from anyone else, other than what goes on in private in the bedroom.

But even so, it will take many years. Jason Jones of the US spoof news programme, The Daily Show, summed it up well during a report he filed from Moscow earlier this year. Jones interviewed Sergei Markov, an analyst close to the Kremlin, who was politely disdainful of gays, but Jones was expecting ordinary Russians vox-popped on the street to condemn the official intolerance, as was the case with a similar report he filed from Tehran a year earlier. They didn't. If anything, the regular Russians were even more vehemently anti-gay than the authorities. "The attitude to gays in Russia is just like ours in America – 50 years ago," Jones quipped. 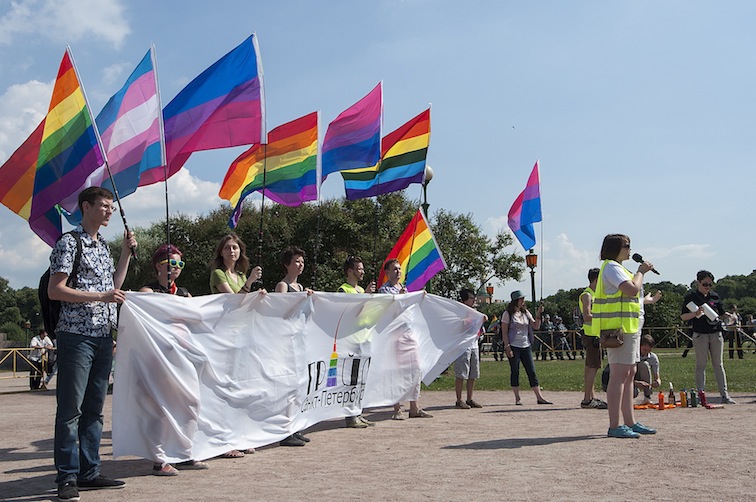