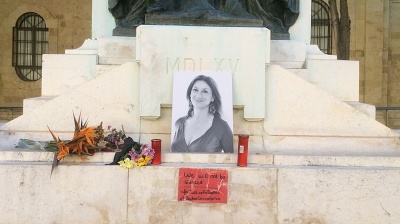 Montenegro’s parliament will form an inquiry committee that will probe the Mozura wind farm project over allegations of corruption, the Daphne Caruana Galizia Foundation said in a statement on December 3.

Maltese investigative journalist and anti-corruption activist Daphne Caruana Galizia was killed by a car bomb in October 2017. During her 30 years as a journalist, she uncovered numerous cases of corruption in Malta and abroad, taking on top level politicians and government officials.

Among the companies she was investigating prior to her death was 17 Black Limited, an offshore company involved in the acquisition of the Mozura wind park by Malta’s Enemalta, Reuters reported in June 2020. 17 Black allegedly made a €4.6mn profit from the deal.

Since the change of government in Montenegro in 2020, politicians from within the new ruling coalition have been pushing for an investigation. Intentions to probe the acquisition of the Mozura wind park were announced by Montenegro’s Deputy Prime Minister Dritan Abazovic back in March.

According to deputy parliament speaker Branka Bosnjak, the investigation is motivated by “the fact that this is a major international corruption scandal” and that “there is very important evidence of multimillion-dollar corruption in the project, which will additionally cost the state 115 million euros through a subsidised electricity contract for 12 years”, the foundation noted in the statement.

Enemalta acquired the Mozura wind farm project in November 2015, four years before it started commercial production. The 46MW plant is located in Ulcinj and is the first such project in Montenegro.

However, before being transferred to Enemalta, the project was sold to an intermediary, Seychelles-registered Cifidex Ltd., for €2.9mn. The company then sold it to Enemalta for €10.3mn.

In February, Maltese state energy company Enemalta found that €6.8mn of the total price of the deal on the acquisition of the Mozura wind farm was not included in the documents on the deal.

Enemalta launched an internal investigation and found out that, while it acquired the wind farm from Cifidex for €10.3mn, the contract 'under-declared' the price by €6.8m. The sale price listed on the contract signed between the two companies and declared to the tax authorities in the Balkan state was €3.5mn.

Moreover, according to Enemalta, 17 Black’s owner Yorgen Fenech had secretly funded Cifidex’s acquisition of the shares from the actual owners weeks prior to them being sold on to Enemalta.

The internal report recommended that Enemalta hires a Montenegrin lawyer to examine whether the alleged under-declaration was covered by the clause stating that further compensation could be given to Cifidex.

According to earlier reports by Reuters, the UAE-registered 17 Black Limited posted an undisclosed profit of €4.6mn at the time when Enemalta acquired the Mozura wind farm in Montenegro.

Prior to the deal, there were several trips to Montenegro led by Malta’s then energy minister, Konrad Mizzi. Reuters reported that in the same month as the deal was inked, Mizzi and the prime minister’s then-chief of staff, Keith Schembri, received payments from 17 Black Limited for undisclosed services.

Tourists stay away from Montenegro as prices rival Cote d’Azur

Croatian president says Western sanctions aren’t working
1 hour ago
End of Vienna talks means US, Iran political approvals now needed to revive nuclear deal
9 hours ago
Western capitals wonder what kind of sanctions deal Erdogan may have cooked up with Putin
1 day ago
Leaders of Serbia and Kosovo to meet as they pull back from brink of conflict
1 day ago
The Guardian confirms aspects of the controversial Amnesty International report on Ukraine’s alleged war crimes
1 day ago