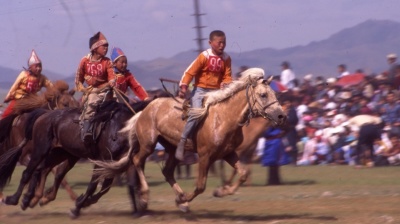 The coronavirus (COVID-19) pandemic has played hell with the international event calendar everywhere this year. Football tournaments have been nixed. The Munich beer festival called off. And the 32nd Summer Olympics, initially scheduled to take place in Tokyo between July and August of this year, has been cancelled. After much discussion the International Olympic Committee said sports fans will have to wait another year to see its streets flooded by tourists coming from all over the world to participate in the biggest sports event in the world.

But not in Mongolia, which has decided to go ahead with its own mini-Olympics: Naadam, Mongolia’s biggest festival, where the population come together every year to compete in the Three Manly Games: wrestling, archery and horse riding, which starts this weekend.

Naadam brings in tourists from all over the world during the three day-long summer games that celebrate the anniversaries of the Foundation of the First Mongolian Sate, the founding of the Great Mongol Empire, and the Mongolian People’s Revolution of 1921. Despite the current pandemic, the event will neither be postponed, as its date is an official Government calendar holiday, nor cancelled. But there have been some adjustments made for this year’s edition.

Though the biggest events take place in the capital, Ulaanbaatar, including concerts and performances at Sukhbaatar Square, the central square where the Mongolian Parliament House is located, cultural festivals are celebrated throughout the country. Naadam might be a centuries-old tradition in its different forms and editions, but it is still a huge part of modern Mongolian culture. For the approximate 3mn natives, it is also a chance to reconnect with families, friends and old acquaintances as Mongolians ride into the capital on this occasion, which is as much about keeping in touch with extended family as a sports event – a nomad’s version of Thanksgiving.

Naadam starts on July 11 with a months-long planned opening ceremony that involves synchronised performances with hundreds of volunteers telling stories about some events of the Mongolian history, featuring dancers, musicians and monks. Two of the greatest moments involve a speech addressed by the President, and paying respect to the Nine White Banners – a type of flag pole adorned with horse tail hair hanging from a circular base in the superior part, with a sort of fork-looking piece on the top of the pole that represents a flame. A tradition initiated by Genghis Khan, the Mongol khans would place banners outside their yurts as a symbol of times of peace. Currently the Nine White Banners also symbolise eternity and great power, and they are kept in the Parliament house, being taken out only for very special occasions, such as the Naadam’s opening ceremony in a procession followed by many others over about three kilometres to the National Stadium.

The Naadam Organising Committee members have decided to go ahead with the ceremony but with some concessions to the pandemic: the performances will happen simultaneously in different locations and be live-streamed on television and via the internet to keep crowd sizes down. The provision of trade and services has also been forbidden around the Central Stadium, which will hit the traditional food tents and are a big part of the festival.

The main traditional dishes of the country comprise of a sort of noodles with meat and some vegetables, called tsuivan, which is either Mongolian or Chinese in origin (no one can agree), as well as flour and meat based steamed or fried dumplings called buuz and huushuur respectively. The latter is the big star of Naadam, but also eaten throughout the year as a popular cheap and fast food.

However, the competition in all three of the traditional disciplines will still take place as usual, except every participant must first have been tested for the COVID-19. The Committee said that “officials will be assigned to check temperatures and enforce the safety rules during the tournaments,” officials said as cited by local media.

It is the colourful traditional costumes that make Nadaam special. The dress-like outfits reflect the ancient and modern countryside styles. Belted by a broad sash called a deel, the upper part works as a big pocket in which horsemen and herders can put their tools, freeing their hands for the work in the field before returning to their yurts, also called gers. Nowadays there are infinite styles of deels, for both genders and all ages and at a vast range of prices. They are mostly used on special occasions, such as for wedding and graduation ceremonies, Tsagaan Sar, as well as for Naadam.

But it is the three manly games that draw the crowds from all over the world. When Genghis Khan united the people of the steppe in the 13th century horse riding became an essential part of Mongolia’s culture. Riding lessons begin at five years old, and children master their skills until they take part in the Naadam race with hundreds of other children – a rite of passage.

Where Mongolian wrestling differs from the international free wrestling is the fact that the competitors weight is not taken into consideration. There are many different titles for the wrestlers, such as Titan, Lion, Elephant and Falcon – all meaning strength. These vary according to the numbers of wins over succeeding fights, especially during Naadam. The Nadaam champions can win cars, apartments, or large amounts of money.

And archery began as a weapon, but the Mongolians soon realised archery was also a way to express their strength allied to precision. For official tournaments, the target is placed at a distance of 75 metres for men and 60 metres for women, who can compete both individually or in teams of eight to 12 people. 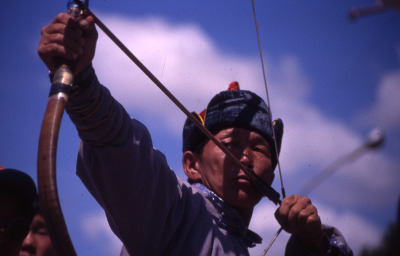 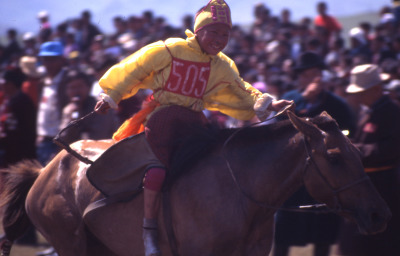 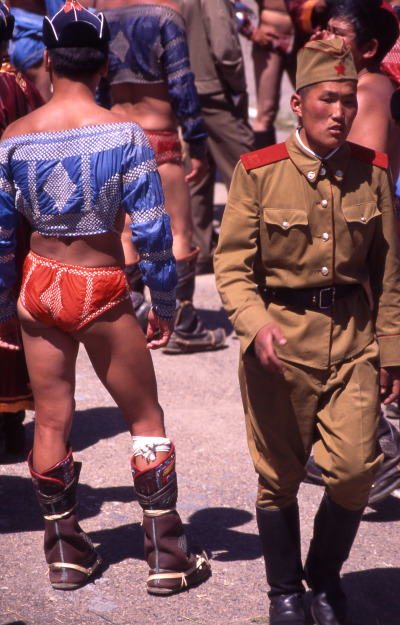 Despite these precautions the biggest change to the event this year will be the absence of foreign tourists. The Naadam week is the biggest week in the country’s tourist season, but this year tourism has dropped to next to nothing.

In the first four months of 2019 the tourism sector achieved $73.3mn in revenue, but this year it only registered $20.9mn, according to the Mongolian National Statistics Office. Out of the total decrease in the exports of services in the first quarter of 2020, almost $24.7mn, tourism services accounted for more than half (54.7%).

According to CEIC Data, Mongolia registered 577,300 foreign visitors in 2019, a increase of 10% compared to the previous year. The Chinese led the charts in the first quarter of 2019, making up 39.6% of the total number of tourists in Mongolia. Secondly came the Russians (36.8%), followed by South Koreans (10.7%). For the same period this year, Russians increased their share to half (51.5%), while China and South Koreans fell to 20% and 14.4% respectively. Visitors from Kazakhstan, the fourth country in the list, have remained roughly the same, accounting for 3% and 3.9% in the reported periods.

China is just across the southern border, so Mongolia was exposed to and aware of the spreading epidemic from the start. The government started taking preventive measures early on, in order to keep the virus from spreading through its very small population, of which half live in the capital of Ulaanbaatar. In January, after children had only been back at school for a week after the winter break, the government shut the schools and switched to online and distance learning via TV.

A few weeks later, the Lunar New Year (Tsagaan Sar) public celebrations were suspended and families were strongly recommended to cancel big family gatherings, when traditionally the younger members travel all around the country to visit their older relatives and pay them their respects.

In February, international flights were suspended and still are. Since then, foreign residents who wanted to go home could only do so in the few chartered flights to locations with a large Mongolian population, who wanted to be repatriated. The land borders with Russia and China were also closed to travellers, but not goods.

The fast action of the government paid off. The first confirmed COVID-19 infection was only announced on March 10, brought into the country by a French citizen. Three months later the country now has had 215 reported cases, though there are no reports of local transmission, and so far, not a single death.

Hoping to keep things this way, the Government intends to maintain the country in lockdown until a vaccine is found, according to an announcement made by Prime Minister Khurelsukh Ukhnaa on May 25. Currently there are no public plans to reopen the borders or restart international commercial flights.

Small nation enters new year battered and bruised by the pandemic and defeat in the autumn war with Azerbaijan. A modest economic rebound is within reach should the peace hold.

One of Russia’s biggest wood product companies, Segezha could be Sistema’s next IPO

Segezha is Russia's biggest pulp and paper company. Owned by multi-industry conglomerate Sistema, the company could be the next up in the groups string of IPOs

2020 was a bad year for human rights around the world, but the US’ upcoming Biden presidency is an opportunity for change, says Human Rights Watch.

Lithuania's economic contraction in 2020 was among the smallest in Europe, but its recovery will be slower than in the other Baltic states in 2021.