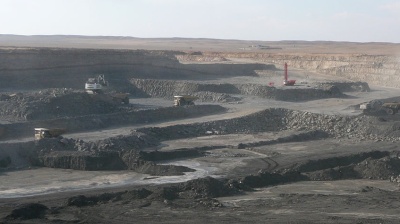 Protesters demanded to know where profits have gone from the mining of resources such as Mongolia's giant Tavan Tolgoi coking and thermal coal deposit. / Brücke-Osteuropa, public domain, cc.
By Anand Tumurtogoo in Ulaanbaatar December 5, 2022

The demonstration, attended by dozens, was called in response to rumours allegedly spread by the prime minister in reference to huge amounts of coal profits that have been stolen, or embezzled into private entities, rather than placed in the government fund.

The protesters demanded accountability from the government on the issue at a time when any type of profit could help the country negotiate economic hardships brought about by the global economic downturn.

On December 5, Cabinet members held a press conference to address the allegations of theft surrounding the coal revenues.

"In relation to coal theft, 10 criminal cases have been initiated and they are being investigated in three types of cases involving contracts, transportation, and railways," Khurelbaatar added.

Erdenes Tavan Tolgoi's CEO of four years, Gankhuyag Battulga, was dismissed in October, with no explanation for his departure forthcoming.

Pressure on the government to address corruption has risen with Mongolia’s consumers this year coming under pressure from an inflation surge into the double digits.

In late November, officials explained plans to turn Erdenes Mongol into a sovereign wealth fund (SWF) charged with investing profits from the country’s vast nature resources of coal, copper, gold and other minerals.