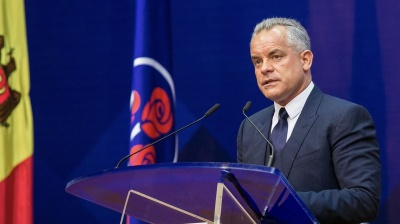 Vlad Plahotniuc, who fled from Moldova this month, has announced his resignation as chairman of the Democratic Party of Moldova (PDM), but confirmed he will remain a member of the Moldovan parliament.

Businessman turned politician Plahotniuc was Moldova’s most powerful politician until this month, when the pro-Russian Socialists and pro-EU ACUM alliance formed a new government together that forced the PDM out of power.

Plahotniuc said his resignation is aimed at helping cooperation between the PDM and "the pro-EU parties in the ruling coalition".

He wrote on his Facebook page on June 24 that the Democratic Party “has made a peaceful transfer of power – without subjecting citizens to risks”.

“They [the new authorities] want to struggle against me but are struggling against the Democratic Party, which cannot indeed bring good to the PDM or to the pro-European parties in the governing alliance,” wrote Plahotniuc.

He pointed out that the pro-European parties in the ACUM bloc are refusing to enter into dialogue with the Democratic Party “because they don’t wish to discuss anything with its chairman who is a problem for them”.

Plahotnuic's control over state institutions including the judiciary, criticised as tantamount to state capture, had led ACUM's leaders to refuse to work with the PDM and turn instead to the Socialists, despite the deep political differences between the two groups.

“I want to remove this impediment and take a decision that will show that the Democratic Party does not depend only on one person i.e. on me. Today I have resigned as PDM chairman and recommended my party colleagues to convoke a party congress possibly soon in order to elect a new organisation leadership and adopt a new PDM political programme. To exclude all possible speculations, I hereby state that at the congress I shall not seek any posts whatever in the party,” wrote its former leader.

Avia Invest, the company that operates the international airport in Chisinau under concession, has promised to pay all its debts and furthermore invest €170mn in the planned new terminal, ... more

Moldova’s central bank, the BNM, cut the refinancing rate by 1pp to 4.5% on March 4, citing disinflation risks posed by the global Covid-19 coronavirus outbreak. The decision to ease monetary ... more

Banca Transilvania (BT), the biggest financial group in Romania, plans to take over Microinvest, the leader of the non-bank financial market in Moldova specialised in financing micro-enterprises, BT ... more