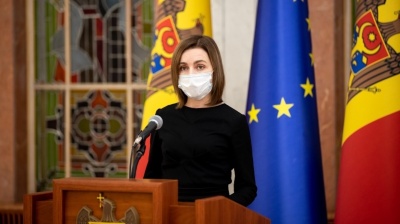 President Maia Sandu at a press briefing on February 23.
By Iulian Ernst February 24, 2021

The Constitutional Court in Moldova ruled in favour of the Socialist Party (PSRM), which objected to President Maia Sandu repeatedly appointing the candidate of her pro-EU party Action and Solidarity (PAS) as prime minister-designate.

Sandu has been trying to force early elections by appointing her candidate Natalia Gavrilita in the expectation she will be rejected by the parliament. However, the court stated that the parliamentary factions and the president must resort to new consultations, and that Sandu should negotiate “in good faith” with the political parties “for identifying a political majority” — implying that her repeated appointment of Gavrilita ignored such requirements.

The ruling only confirms the political deadlock reached after Sandu’s presidential election win last year was followed by the resignation of Socialist prime minister Ion Chicu.

The Socialists, which are the largest party in the parliament, are expected to insist on appointing their own candidate, which would allow them to buy some time, since snap elections would weaken their position in parliament according to recent electoral polls.

The Socialists argue that they formed a new majority in parliament with the MPs controlled by the fugitive businessmen Ilan Shor and Vlad Plahotniuc, and their candidate Mariana Durlesteanu cannot be ignored.

Or else, Dodon warned, the Socialists would take steps to settle the crisis including by mass protests and legal actions against “those responsible for the crisis”.

However, the court refused to state, as requested by the Socialists, whether the president’s refusal to nominate Durleșteanu is a serious offence — a ruling that would have allowed Socialists to suspend Sandu from her post and their appoint own candidate as PM-designate.

Sandu responded to the court’s decision with political statements that provide little insight into what she might do further.

She stated at a press briefing that the court’s decision “could be understood if there was a situation of normalcy in the country, but at this time the situation is totally different”.

"Moldova needs a new parliament, a government of professionals, supported on a long-term basis, not by an ad-hoc majority. People know that there is only one solution — early elections," she said.

She also stated that she “is not a prisoner of the office she held and will not be a comfortable president for the ‘criminal gangs’”.

"We do not have the right to allow them to capture again the state institutions. The people are the real holders of power in the state and are the ones who can resolve this situation. In snap elections or in a referendum, people will decide their future and that of the country," Sandu pointed out, mentioning for the first time the possibility of a referendum to settle the political deadlock.