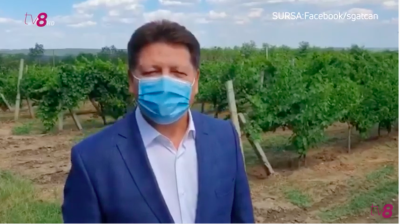 Ex-MP Stefan Gatcan posted a video on his Facebook page saying he was well but needed rest.
By Iulian Ernst in Bucharest July 2, 2020

Ex-MP Stefan Gatcan, who resigned from the ruling Socialist Party (PSRM) to join the opposition Pro Moldova on June 30, has filed a complaint to the Prosecutors’ Office claiming he was physically forced to sign his resignation as an MP by his former colleagues from the PSRM. He later disappeared, and the opposition claims he was forced to leave the country.

The Socialists are bleeding MPs, who are moving to Pro Moldova, the political vehicle reportedly controlled by the fugitive former Democratic Party leader Vlad Plahotniuc, and the ruling coalition the Socialists formed with the Democratic Party has already lost its majority in parliament.

President Igor Dodon has accused the Democrats of literally buying MPs “piece by piece”, and said Gatcan’s price, for instance, was $1.2mn.

Pro Moldova deputies gathered at the building of the presidential administration on July 1, claiming that Gatcan had been detained by force within the building.

According to the leader of Pro Moldova Andrian Candu, Gatcan was “held” in the building of the presidential administration and forced to resign from parliament under pressure and threats.

Border guards said Gatcan and his family left Moldova at 17:30 the same day, heading to Romania.

The MP later appeared in a video, shot in an unidentified vineyard, after media reported he was abducted and taken out of the country.

“I will have no communication with friends or mass media since I need rehabilitation,” he said.

“Dear friends, I am well, healthy and not being seized by anyone. I need some peace,” he added in a caption on his Facebook page.

Pro Moldova MP Vladimir Chebotari said on TV8 that Gatcan was forcibly taken out of the country. Opposition politician Renato Usatii made a similar claim, saying Dodon deliberately took Gatcan out of the country so that neither law enforcement officers nor journalists could contact him.

In response to this, Socialist MP Corneliu Furculita — who was reported stopping Gatcan’s car and arguing with him publicly on the day he disappeared — said that the Socialists had nothing to do with Gatcan’s disappearance.

On July 1, the day after Gatcan moved from the Socialists to Pro Moldova, Furculita announced on his Facebook page that Gatcan had resigned from parliament.

Furculita noted that Gatcan wants to "devote himself to medicine, but remains part of the PSRM.” Gatcan owns a medical clinic in Chisinau.

The Romania National Environmental Guard is investigating the killing of a large brown bear that activists allege was illegally shot by a Liechtenstein prince during a hunt in the Carpathian Mountains.