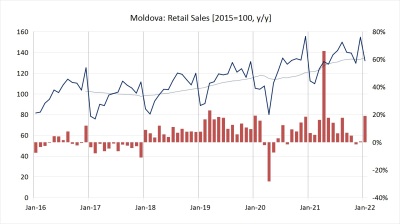 The turnover of the retail sector in Moldova surged by 19%, expressed in comparable prices, in January 2022 despite the 16.6% rise in consumer prices, according to data published by the statistics bureau BNS.

It is an outstanding figure that, despite generally buoyant private consumption in the country and unless it reflects high volatility, contrasts with rather cautious outlook on households’ budgets amid sharply rising energy prices that are expected throughout the year. In fact, consumer price inflation surged to 18.5% y/y already in February and is expected to peak above 20% during the second half of the year.

With weak if any economic growth this year, probably no remittances from Russia and the European diaspora's incomes under pressure, private consumption and retail sales are likely to come under pressure in 2022. Households’ savings, in banks or under the mattresses, as well as the grey economy are likely to serve as buffers and to cushion what normally should be a tough adjustment to households' budgets. The pattern was visible in the last quarter of 2021 when private consumption remained strong (+13.3% y/y) despite the negative (yet marginal) performance of the real wages.

In 2021, the retail sales in the country rose on average by a real 10.5% compared to 2020, under the circumstances of 5.1% average consumer price inflation. The net wages increased by 12.4% y/y last year, which explains most of the impetus seen in private consumption.

Russia registered a return to growth in its service sector in June, according to the latest S&P Global Service Manager’s Index (PMI) data, registering 51.7 in June, up from 48.5 in May – the first growth in four months.

After the lifting of most coronavirus related restrictions and a period of low infections, several countries are now reporting the highest numbers of new cases for months.

Market consensus remains for a 75bp rise next week that will put the interest rate at 6.75%.

Conditions in the Czech manufacturing sector deteriorated in June for the first time since August 2020, with the index falling from 52.3 to 49.