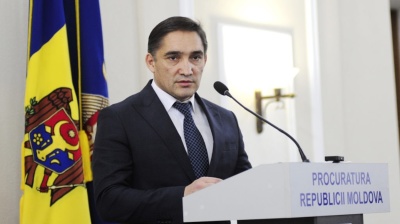 Moldova’s head prosecutor Alexandr Stoianoglo (pictured) said oligarch and politician Vlad Plahotnuic was one of the main beneficiaries of the theft of around $1bn siphoned off from three Moldovan banks.
By Iulian Ernst in Bucharest May 19, 2020

The former leader of Moldova’s Democratic Party, Vlad Plahotniuc, was the real beneficiary of $100mn worth of loans from Banca de Economii (BEM) that were never returned, Moldova’s head prosecutor Alexandr Stoianoglo said at a press conference announcing a revision of court decisions issued so far in relation to the $1bn bank frauds.

Stoianoglo claimed that Plahotnuic, Moldova’s most powerful politician until his party was ousted from office last June, was one of the main beneficiaries of the theft of around $1bn siphoned off from three Moldovan banks. The losses were covered by the central bank to be later paid from the public budget.

The chief prosecutor linked the accusations against Plahotniuc to the case of Veaceslav Platon, who received, during Plahotniuc’s time in power, two sentences for bank fraud and fraud related to insurance firm Moldasig leading to a total of 25 years in prison. Platon, as well as Stoianoglo, has pointed to Plahotniuc as the real beneficiary of the $1bn bank frauds in Moldova.

The case involving Platon was completely falsified, said Stoianoglo on May 18. Stoianoglo’s statement reportedly refers to the first sentence received by Platon, related to the $1bn bank frauds.

Platon’s sentence relating to Moldasig was already scrapped by the Court of Appeal in February this year (after Stoianoglo took over as head prosecutor) and the case was sent to a lower court on grounds that the defendant was not given proper rights to defend.

Based on the accumulated evidence, the Prosecutor's Office will initiate the procedure to review Platon’s sentence and will insist on a fair examination of the case, with the guarantee of all his procedural rights — which he was previously deprived of, Stoianoglo said.

“In order to avoid all kinds of speculation, we will ask the court to examine the case in a transparent manner, in a fair trial, to allow the public to assess the evidence, to find out who, in fact, is behind these fakes and who, in reality, benefited from the stolen financial means,” Stoianoglo added.

“We have indisputable evidence that the citizen Plahotniuc is the beneficiary of the money obtained in the form of loans from BEM, through the Shor Group, covered accordingly, from the financial means of the National Bank of Moldova,” Stoianoglo continued.

The money was allegedly used to buy a package of shares in a bank, the building of the insurance company ASITO, the Fashion House building and the National hotel. Also, the money received from the loans from BEM was allegedly used by Plahotniuc for personal purposes or by his affiliated companies to buy an airplane, pay for personal charter flights, and also by other people in his entourage.

“Based on the findings, today, regarding the citizen Plahotniuc, a new indictment will be adopted, following that his accusation will be completed in order to incriminate three charges, namely: the creation of a criminal organisation, fraud and money laundering, both committed in particularly large proportions. As soon as the indictments are translated into English, they will be sent to the competent authorities of the United States of America to be extradited and held accountable in the Republic of Moldova,” Stoianoglo announced.